After finishing my study abroad program in June, me and a friend went on a two week backpacking trip around Europe.

It was so much fun and a once in a lifetime experience, and today I’m going to tell you a bit more about it! 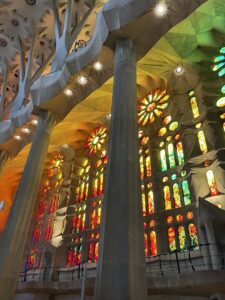 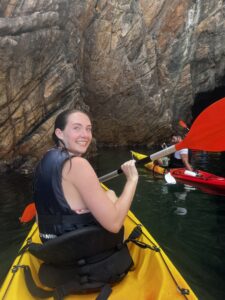 We began by taking a train from Madrid to Barcelona. We traveled by train throughout the entire trip through Eurail. I made all of our train reservations online, except for the ones from Spanish train stations which you have to make in person. In Barcelona, we stayed at a hostel, Hola Barcelona, that was only half a mile from la Sagrada Familia. We got passes for the Barcelona public transport and used the buses and metro to get around.

Upon arrival, we got dinner at a local place and turned in for the night. On our first full day we went to la Sagrada Familia and then caught a bus to Park Güell. That evening we got dinner at a restaurant right by the beach and enjoyed the sunset. Then, on our second full day we went on a kayaking and snorkeling expedition on the Mediterranean; we got to go cliff jumping too! Afterwards, we hung out at the beach for a bit longer before heading to dinner at a local ramen restaurant. In the morning, we woke up super early to go watch the sunset on the beach before leaving the city.

After Barcelona, we took a train with a beautiful view through the south of France to get to Paris! We bought a ten ticket package for the metro, and got to our hostel at St. Christopher’s Inn. We got a beautiful pasta dinner and spent the evening getting to know some of our roommates from Denmark! In the morning we got breakfast at an adorable local cafe. Our first full day in Paris we did a hop-on-hop-off bus tour of the city. We got off at a ton of amazing places such as Notre Dame, the Louver, the opera house, and more. We ate some great crepes for lunch along the way! That evening, we had a river cruise on the Seine and watched the sunset at the Eiffel Tower.

On our second full day, we got some pastries from a small bakery before going to the Arc de Triomphe where we climbed to the top for the amazing view! We then did some souvenir shopping before heading to Montmarte for a gourmet food and wine tour. Our last night was spent hanging out with another one of our roommates from the hostel and watching the Eiffel Tower sparkle. We got breakfast with our new friend the next morning before heading out. 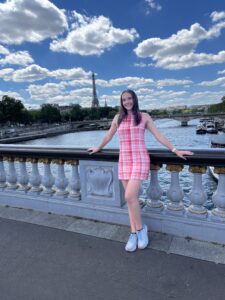 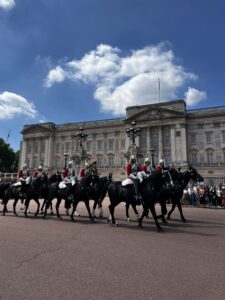 Changing of the Guards at Buckingham Palace

Next up, we took another train from Paris to London. Upon arrival in London, we got lunch at a cute little cafe and rested during the afternoon. The next morning, we got up and headed to the Palace to watch the changing of the guards. We had booked another hop-on-hop-off bus tour, and used that to see all the big sites in the city like Big Ben, the London Bridge, the Globe Theater, and more.

We caught a London Eye flight in the afternoon, and then went to dinner at an English pub for a traditional hearty English meal. Our visit to London was the shortest of our trip, so the next morning we headed to a cafe for some traditional English breakfast tea and pastries, then took the metro to the train station.

Our next train was headed to Frankfurt, Germany; we had a connection in Belgium, but had no problems transferring trains. Once on our final train, we did have a small hiccup in which we were made to get off the train and transfer trains again because they were rerouting the one we were on. But, we safely got on the new train and arrived in Frankfurt without too drastic of a delay. I have family who lives in Frankfurt, so my uncle picked us up from the airport and we all enjoyed an Italian dinner made by my aunt before getting back in the car and heading out once again.

We were taking a girls trip to the Rhine river with me, my friend Lizzy, my aunt and my little cousin. After a short night's sleep in a hotel, we united with our tour group in the morning and went to tour Rheinstein castle that is right on the river. Then, we got back on the bus and went to a small owned winery where we did tastings and shopped for souvenirs of all sorts of adorable german knick-knacks. After the tasting, the tour group had a long cruise along the river which ended in Rüdesheim; this adorable touristy city had many places to shop as well as many attractions like the famous Rüdesheimer coffee that gets lit on fire in front of you at your table! After heading home, we rested for the remainder of the evening. The following days were spent shopping in European boutiques and going to the local pool. Our final night we went for a delicious German meal with a view, then headed to the airport the next morning. 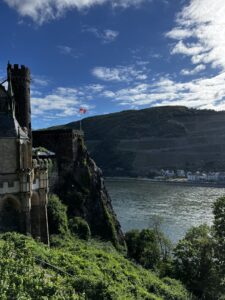 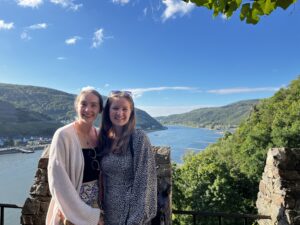 View from the top of the castle Rheinstein

Our travel home was pleasant but nothing short of eventful. Our first flight was delayed, causing us to miss our connections back in the states. We both finally arrived home quite late after spending a few hours more than planned in the JFK airport.

This trip was an absolutely amazing experience, and if you have the chance to do a tour of Europe, I really encourage you to go for it! I hope some things from my journey can be helpful to any of you who may be considering taking a journey of your own someday.