Some Reflections Before a Hike in a Land Beyond Imagination Have you ever seen somewhere so breathtaking that, no matter how long you sit and stare at it, your brain cannot comprehend it’s reality? That’s how Norway has been so far, especially the rural parts and towns. How we’re the first UA study abroad group to come here, I have no idea, but I hope students come here and continue this program. It’d be a mistake if they didn’t.

As of the time writing this, we're on our lucky 13th day and are about to arrive in our fourth city, Stavanger, where we'll journey to Preikestolen, or Pulpit's Rock, and watch the sunrise. It really hasn't felt like nearly two weeks; we've done and seen and traveled so much, you could tell me we've been here a month or more, and I'd believe you.

To give a brief breakdown, Oslo is full of museums, designer stores, and public transport. (I don't think I saw a gas station until long after we left. That or we just weren't near any.) We stayed in a hostel connected to a hotel which served a breakfast buffet we still long for. With varying groups of classmates, I saw the very tall MUNCH museum, the brand-new National Museum, the Norwegian Museum of Cultural History, etc., and etc. There's something on every street, except skyscrapers. For a capitol city, Oslo is surprisingly quiet and full of short buildings. The cruise ships in the port were taller than some of the buildings by the water. 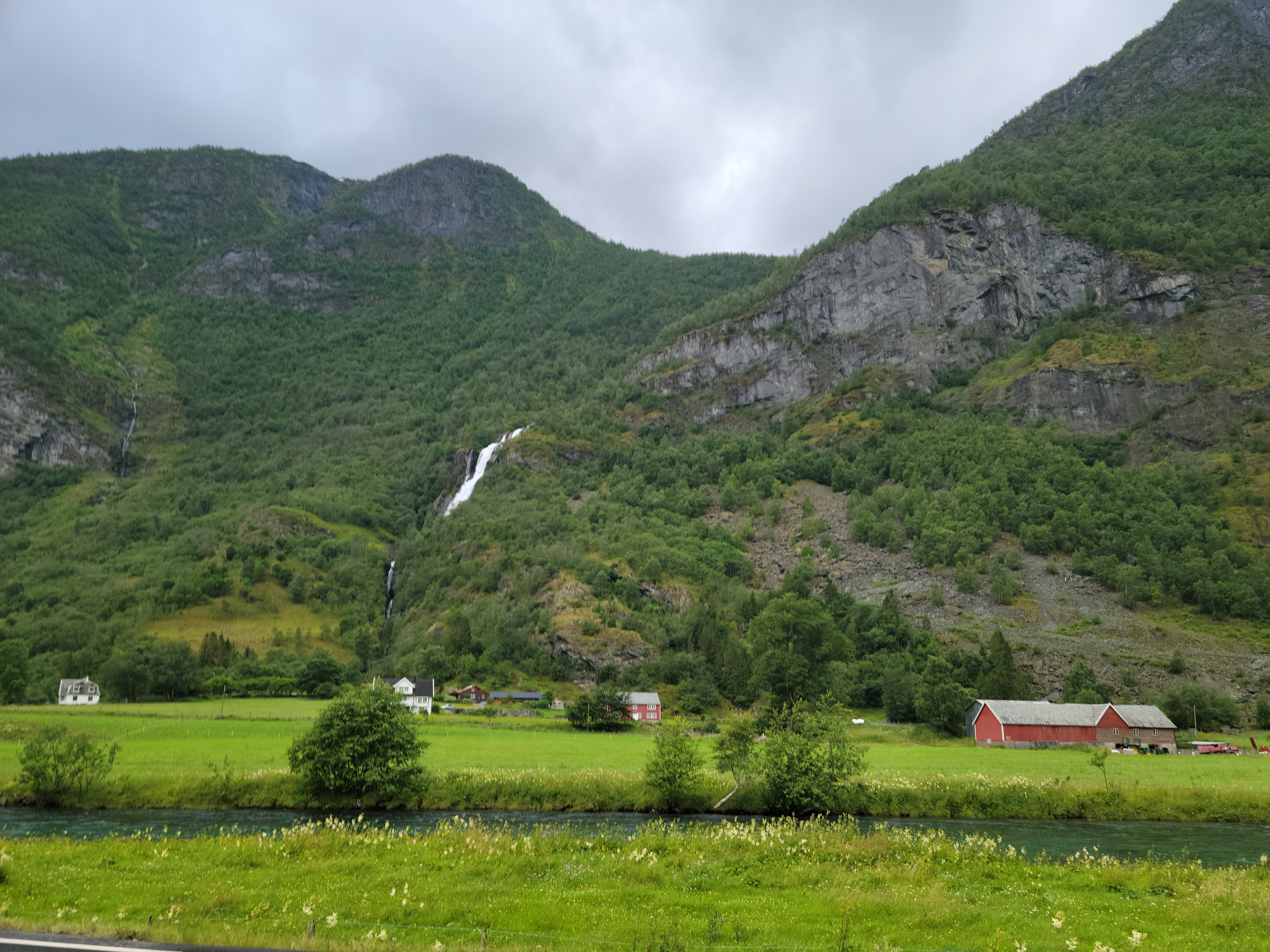 Flåm is a tiny village in the western fjords. Surrounded by gigantic walls of green mountains and thin streams of waterfalls, it felt like everywhere I looked was the backdrop of a fantasy movie. From a lookout by one of these waterfalls (up a steep path and ~562 steps, or 37 flights), the village looked like a model town, train line and all. This is where we really started hiking, as well. A group of us hiked 2 miles into the valley to see a church from the mid-1600s. Another group of us hiked up to Otternes, a collective farmyard from 300 years ago. Across the fjord from Otternes were piles of rocks on the shore, a Viking graveyard we'd saw earlier that morning when we had gone kayaking. 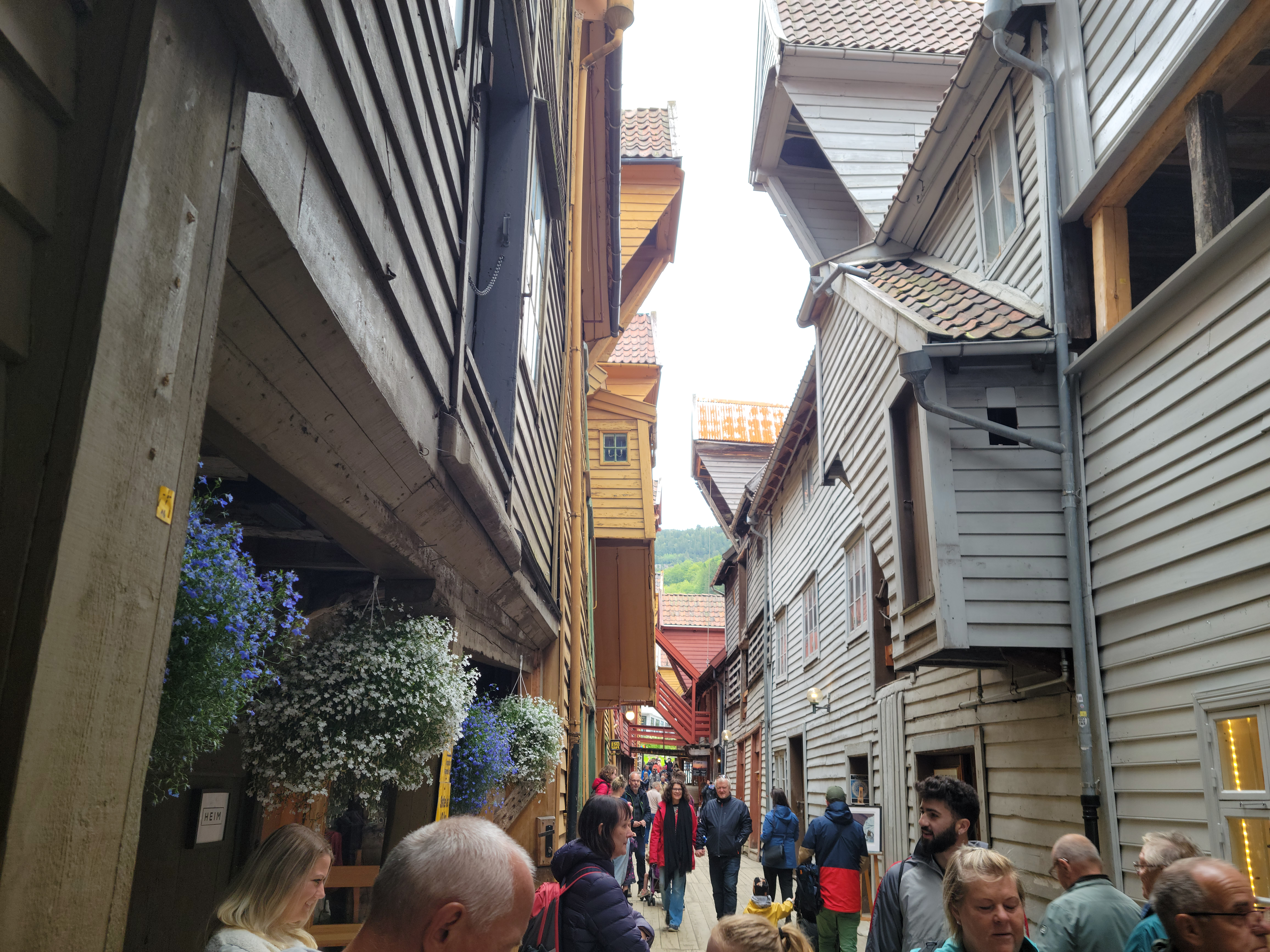 Bergen is the second largest city in Norway, far out on the western coast. It's surrounded by seven mountains, one of which our hostel is located on. The port is home to a large fish market (which sometimes has king crabs on display), the Bergenhus Fortess, and Bryggen, that historical lineup of colorful wooden buildings. It's a very quaint town, full of twisting steep streets and Seattle-like rain. (Seattle is its sister city, after all.) It even has an ice bar, set at about 23 degrees Fahrenheit. I don't drink, so I watched my classmates enjoy themselves and take many, many pictures. It was a nice little excursion to do after that morning, when several of us hiked up Mount Ulriken, just behind our hostel. The hike up is steep, given that this mountain is the tallest of the seven mountains at 2,109ft. If you take the shorter but steeper route to the top, you walk up nearly 1,500 steps. If you had the luck we had, you could see about 40 yards in front of you due to heavy fog over the top half of Ulriken. My half of the group ended up a mile behind the other and, at the advice of a local, took the gondola down to prevent what she implied to be death or injury from hypothermia. The other half hiked over to Mount Fløyen through mud and puddles, losing each other at times in the fog. Surprisingly, I didn't even reach my 6,000 steps by the time we reached the hostel.