UA in Greece: A bit of a culture shock 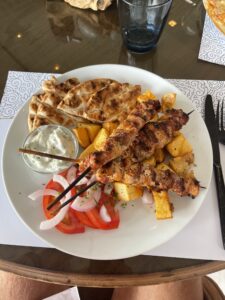 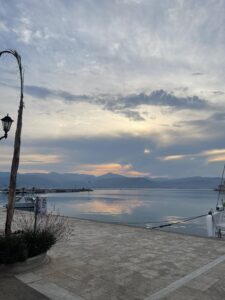 The view from dinner in Nafplio!

Hey guys! My name is Jake Faulk and I am currently in Greece on the UA in Greece: Cradle of Civilization program. I wanted to speak about my experience arriving in Greece and experiencing a brand new culture.
So, for some context, I have only ever been abroad in the Caribbean. Coming to Greece has been one of the most ambitious things I have ever done and I have loved every second of it. However, first arriving in Greece after being so used to American culture came as a shock. I was not super comfortable with the language, didn’t understand that dinner in Greece was a multiple hour event, and I also didn’t anticipate how different the food was. I have had Greek food before but never the authentic stuff.
With the language, I learned a few words such as “thank you,” “sorry,” and “yes” and “no.” Luckily, many Greek people speak English but I have been shocked by how little I am able to communicate with the local people. I have had several occasions where I am completely unable to speak with someone and have had to find ways around it.
Next is dinner. In America, meals tend to be as short as possible with people rushing to get in and out. However, Greece is the exact opposite. There have been several occasions where we would sit down and eat but would end up being at the restaurant for several hours. Not to say that this is a bad thing. It gave all of us an opportunity to relax and take some time to enjoy ourselves. It just came as a shock in comparison to how the United States is.
Lastly is the food in Greece. In the US, I am a sucker for the American classics like hamburgers, bbq, and fried everything. Greece, on the other hand, does not have these kinds of foods. Rather, gyros, souvlaki, and moussaka reign supreme. Over time, I have become quite fond of these foods but I have missed traditional American cuisine.
Ultimately, my experience in Greece has been an amazing one so far. I have met some great people from UA and from Greece. The people in this country are so nice and welcoming. While the differences between Greece and the US are significant, I have grown to appreciate the differences and realize that those are what makes studying abroad such a positive experience. In the end, as much as these differences were shocking, this experience is one that I will always remember.