Learning to Go With the Flow 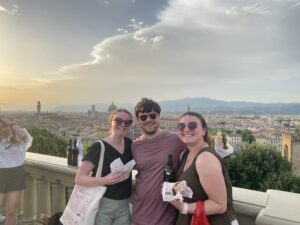 Me and the friends who helped me get home safe and sound!

On the last day in Florence, I was already a little sad about leaving, but overall excited to go back to the U.S. and get back into a normal routine. The first set of travelers from the group got up to be at the Florence Airport at 4 am. Little did we know we would not get back home until 41 hours later. When we tried to check in the woman at the counter informed us that we could not get our boarding pass, and this would be the start to a traveling adventure. Even though I knew that we would get home eventually, I was nervous and anxious about our new travel plans. What should have been only 2 flights back ended up becoming a bus ride and twelve hour wait, then a night in the Paris airport, then two more flights with some fast running in-between them.

I learned that it did not help getting upset because ultimately everything was out of my control. I also learned that I would feel the best if I just took the adventure as it came and just be nice to the airport employees that were trying to help us. I think this lesson was initially learned while studying abroad and that there is no way to control the world around you especially in a foreign place. The best thing to do is to do as the locals do and understand that the world does not revolve around you. Being abroad allowed me to take a step back and see the bigger picture of how different communities thrive because this was my first time going to a place where I did not really belong in the community. I know that this study abroad program has given me the tools needed to travel again and be confident in myself to go far away from home and away from my immediate support system.