In Cholula, Puebla, Mexico, and many Mexican cities, the center of town is called the Zócalo. During much of the three-and-a-half days I spent in Cholula, I was either at the Zócalo or walking through nearby streets. The roads are beautiful. Most of the roads are made of brick, as are the sidewalks. The streets look clean—while walking through town with my study abroad group, we saw multiple people mopping the sidewalk in front of their shop-- and are largely free of litter.

The buildings that line the streets of downtown Cholula are all connected, and each is painted a bright color. This phenomenon dates back to colonial times, although nowadays, zoning regulations require all businesses to adhere to the norm. The Dominoes across the street from La Plaza, for instance, is bright orange. Dominoes notwithstanding, the vast majority of the shops appeared to be family-owned, single location shops, and frequently it looked as though the family lived behind or above their shop. The result is beautiful streets surrounding La Plaza.

The Zócalo itself is beautiful. It contains many elements common to American parks—a small playground, scattered walking paths, well-kept lawns, a fountain, and squirrels. (There were black squirrels in Cholula, which I was informed are common in the US but I don’t see often). Electrical boxes were painted a vibrant purple, as opposed to the dull green common in parks near my house. To the south of the park is a line of beautifully-colored buildings. To the west is a row of restaurants. Parroquia de San Pedro (St. Peter Parish) stands to the north of the park, while a whole complex of Catholic churches sits on the east side of the park. A few blocks in the distance sits Iglesia de Nuestra Señora de los Remedios on top of an old, mostly buried Tlachihualtepetl pyramid.

There is a market few blocks west of the Zócalo that I was able to visit. The market consists of a large warehouse packed full of stands, selling mostly fruits and vegetables but also meat, candy, flowers, shoes, clothing, souvenirs, sweets, or hot meals. Few stands had prices listed, but where they were, prices were very consistent; a kilo of bananas costs 16 pesos whichever stand you go to. The stands were closely packed together—it was difficult to pause for a moment without blocking an aisle—but the market was quieter than I would have expected. At 10:30 AM, some stands were just opening. What most stands out to me was seeing a man carry a just-cleaned, four-foot long pig on his back to his butcher stand. Overall, while the market seemed very chaotic to me, a visitor who spent a handful of minutes inside, it was clear that the locals understood how to effectively navigate the market. 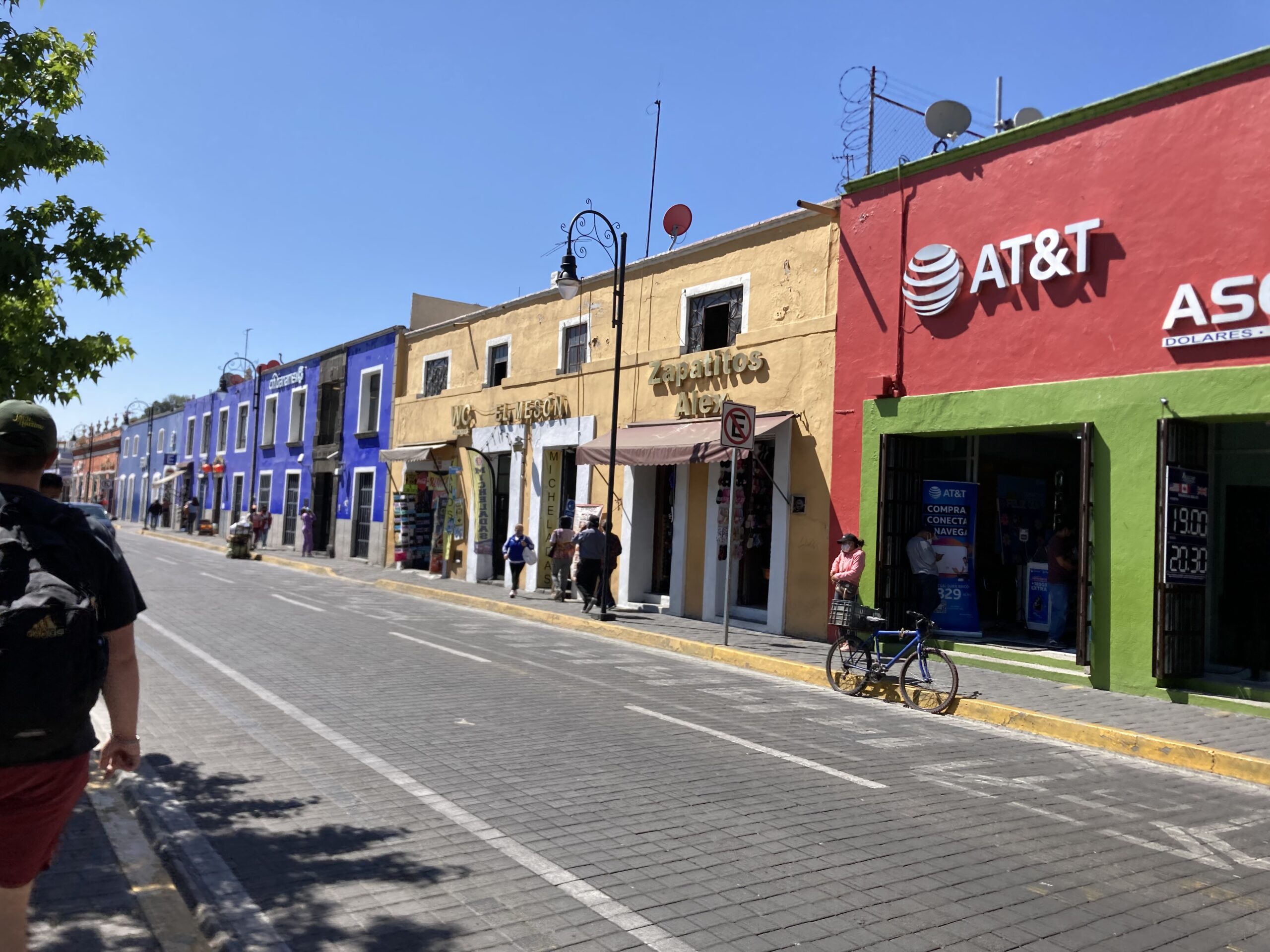 The shops that line the streets near downtown Cholula are painted vibrant colors, even the chain stores. 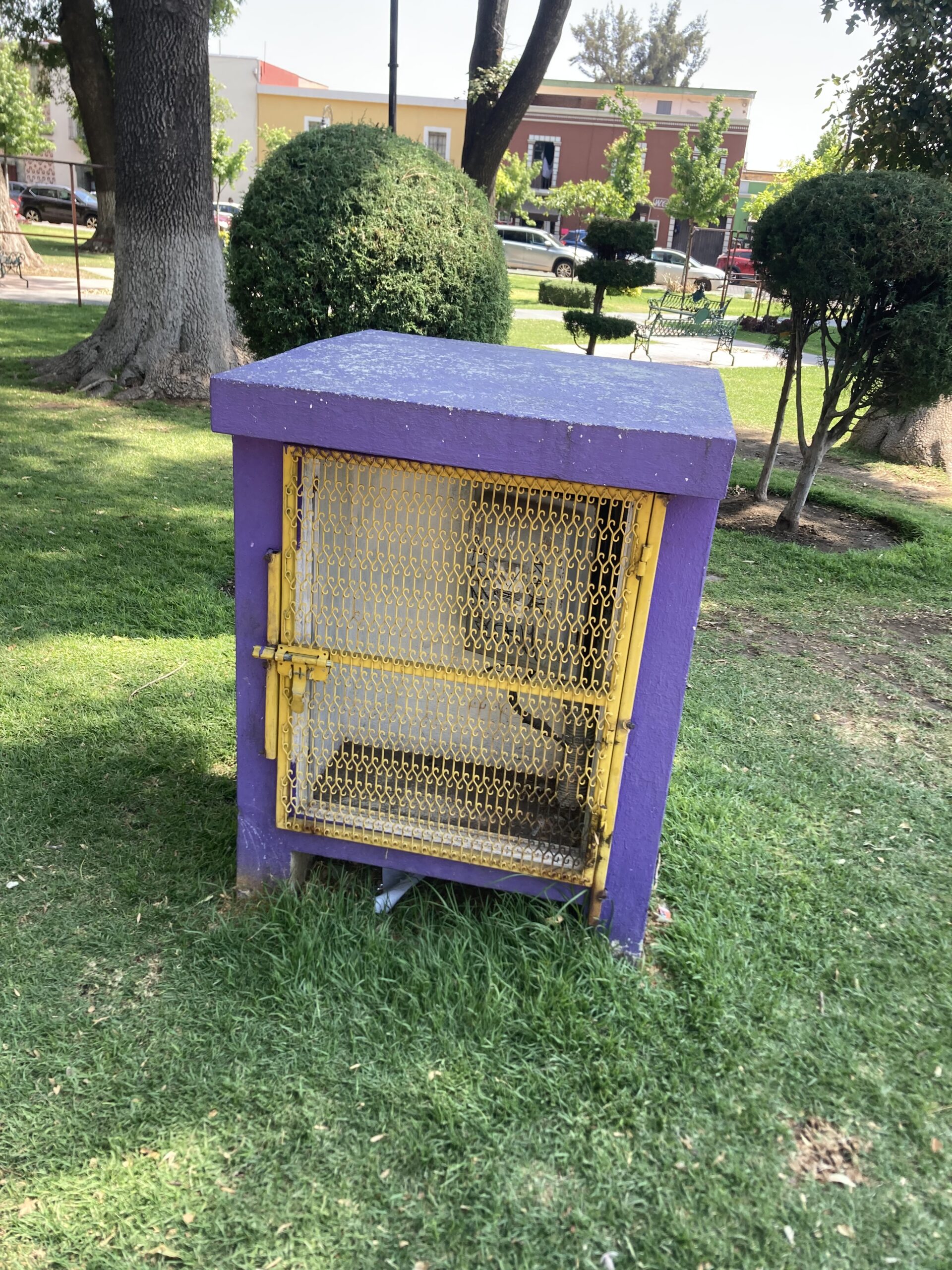 Even the electrical boxes in Cholula are brightly colored. 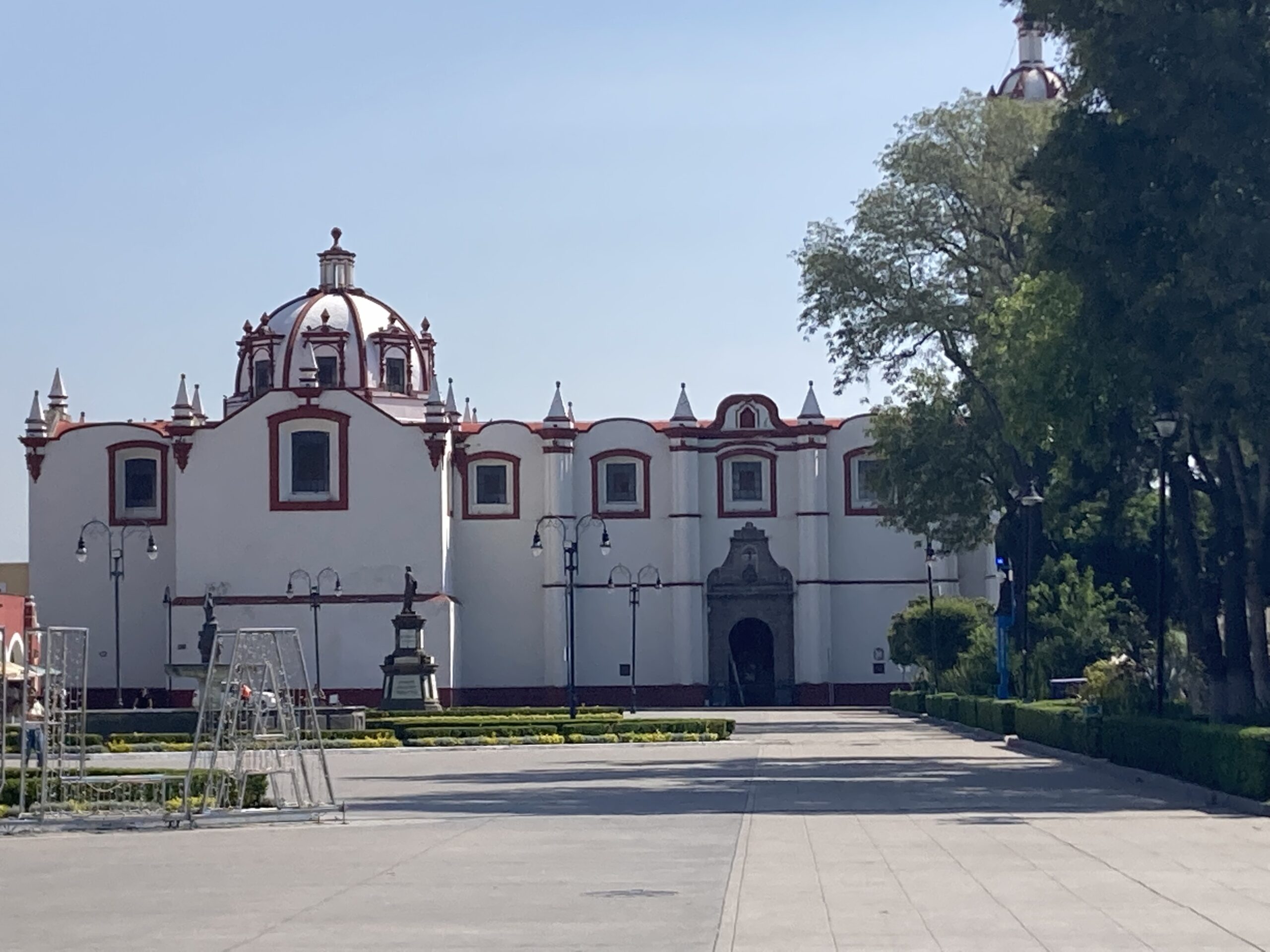 On the west side of the Zócalo is a fountain, and in the background, Parroquia de San Pedro. 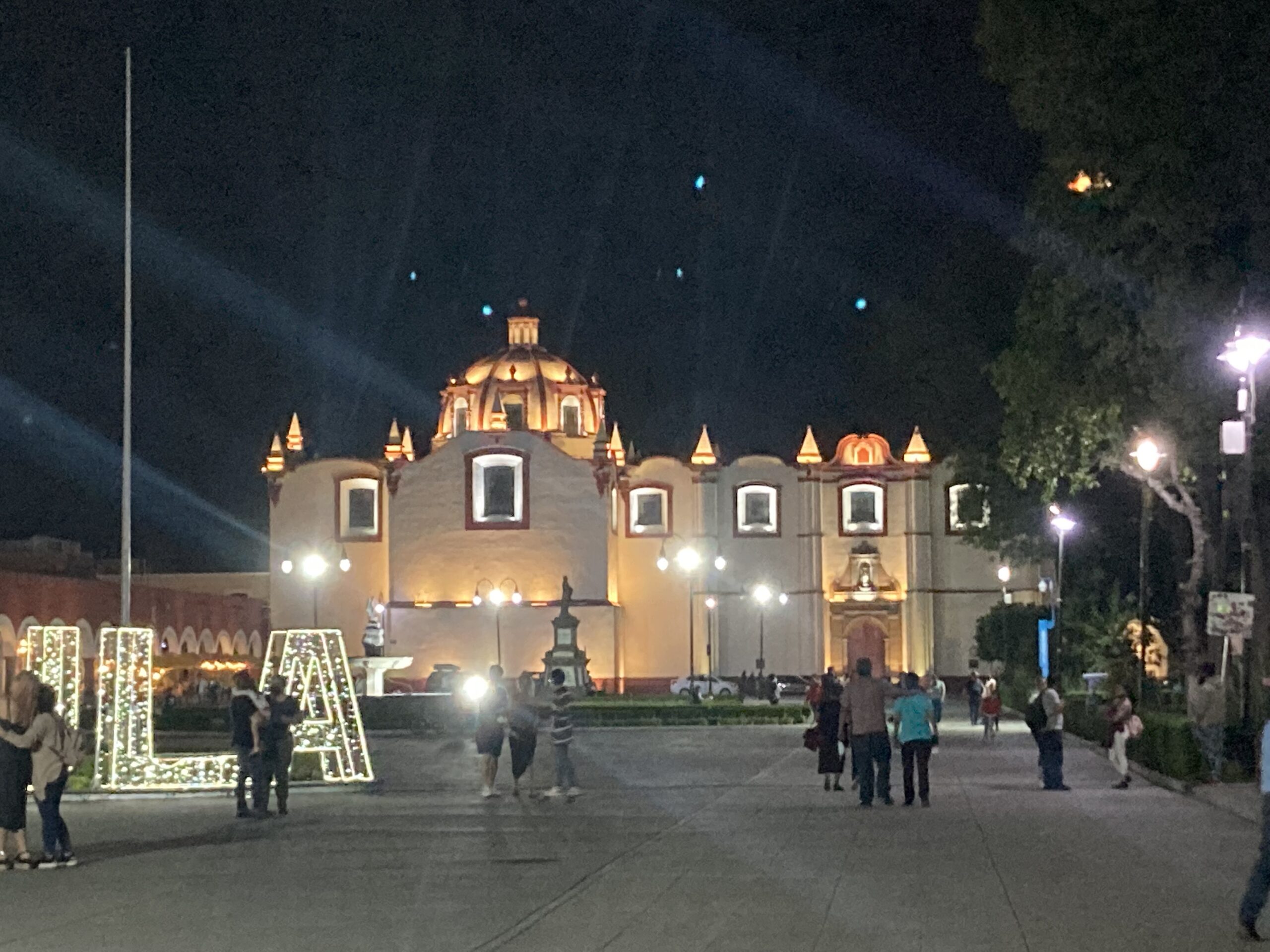 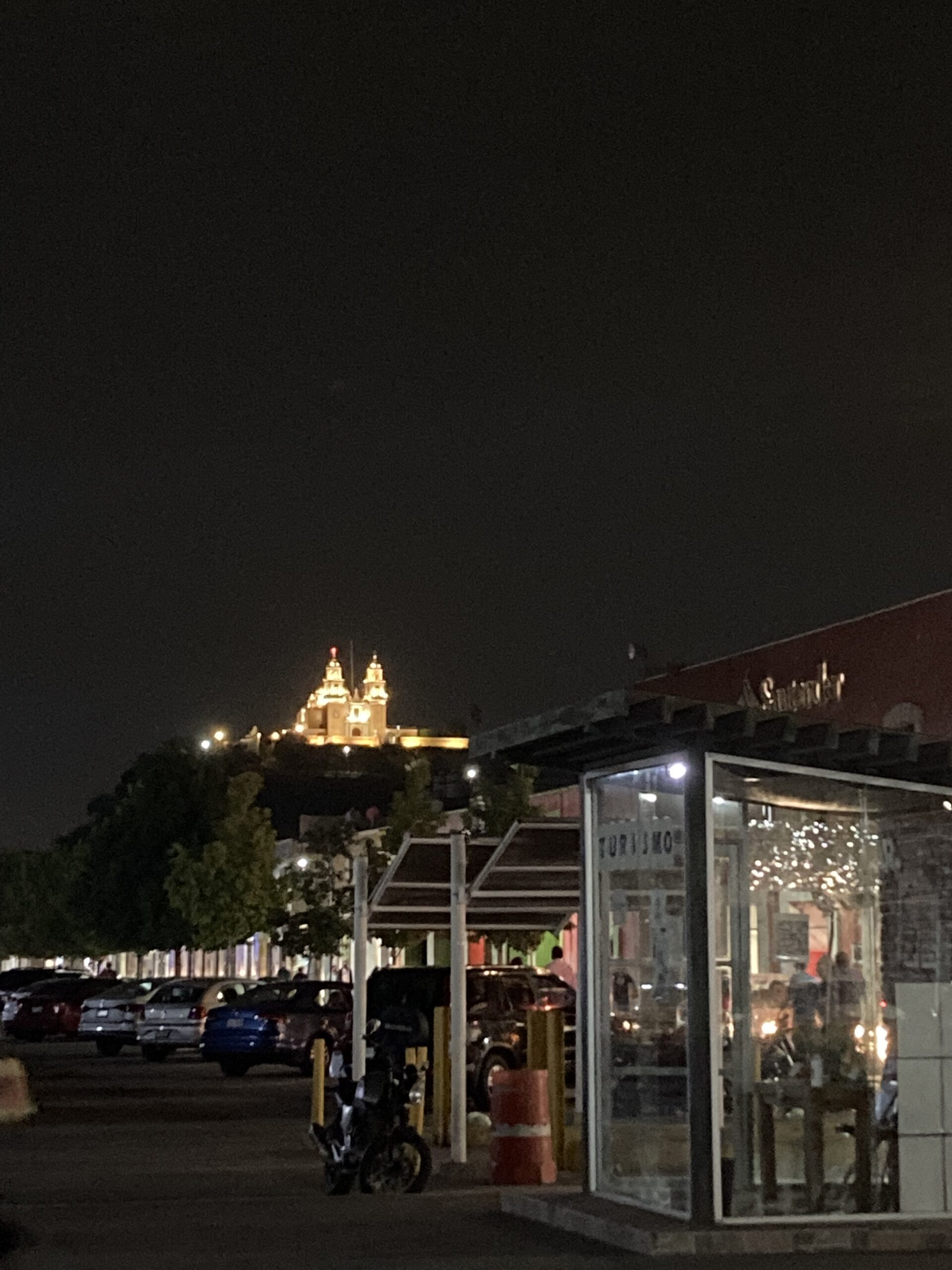 From the Zócalo, one can see the Iglesia de Nuestra Señora de los Remedios shining through the night.