Why I chose Barcelona, Spain as my study abroad destination

I have known that I wanted to study abroad in Spain since I began taking Spanish classes during my freshman year of high school. My Spanish teacher constantly talked about how beautiful it was and how the experiences that you will have in Spain will be unlike those in any other country. Throughout my Spanish classes in high school, I was able to learn a lot about the culture in Spain, especially in Barcelona. Barcelona interested me more than any other city in Spain because of how it is part of the Catalonian region of Spain. The Catalonian region speaks Spanish as well as the language of Catalan, which is unique only to this region of Spain. Another thing that interested me in my high school Spanish class was how breathtaking the architecture and art was in Barcelona. Barcelona is known for its world-famous Gothic arches throughout the city as well as its eccentric modern mansions.

Although the main deciding factor about choosing to study in Barcelona was the influence that my high school Spanish teacher had, I felt like this was the perfect semester to study abroad. I am currently a junior and have been on campus for 5 semesters now. I felt like the semester of my junior year would be the perfect time to go to Barcelona as I would not be missing any football and the spring is a beautiful time to live in Barcelona. I felt like this year was perfect to pick up and go to another country as I am fairly established at school and believed that this would be an important change of pace.

Thankfully, the University of Alabama has so many resources when picking a study abroad program and the proper way to fund it. There is an abundant amount of scholarships that the study abroad office offers, as well as the program that you may be taking your trip through. I am very grateful to say that this was a very attainable opportunity for me thanks to the study abroad office. I am looking forward to the experiences that I will have in Barcelona, all the new people I will meet, and all the amazing food I will eat! 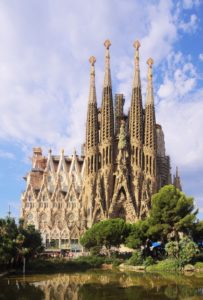