The Final Night in Russia 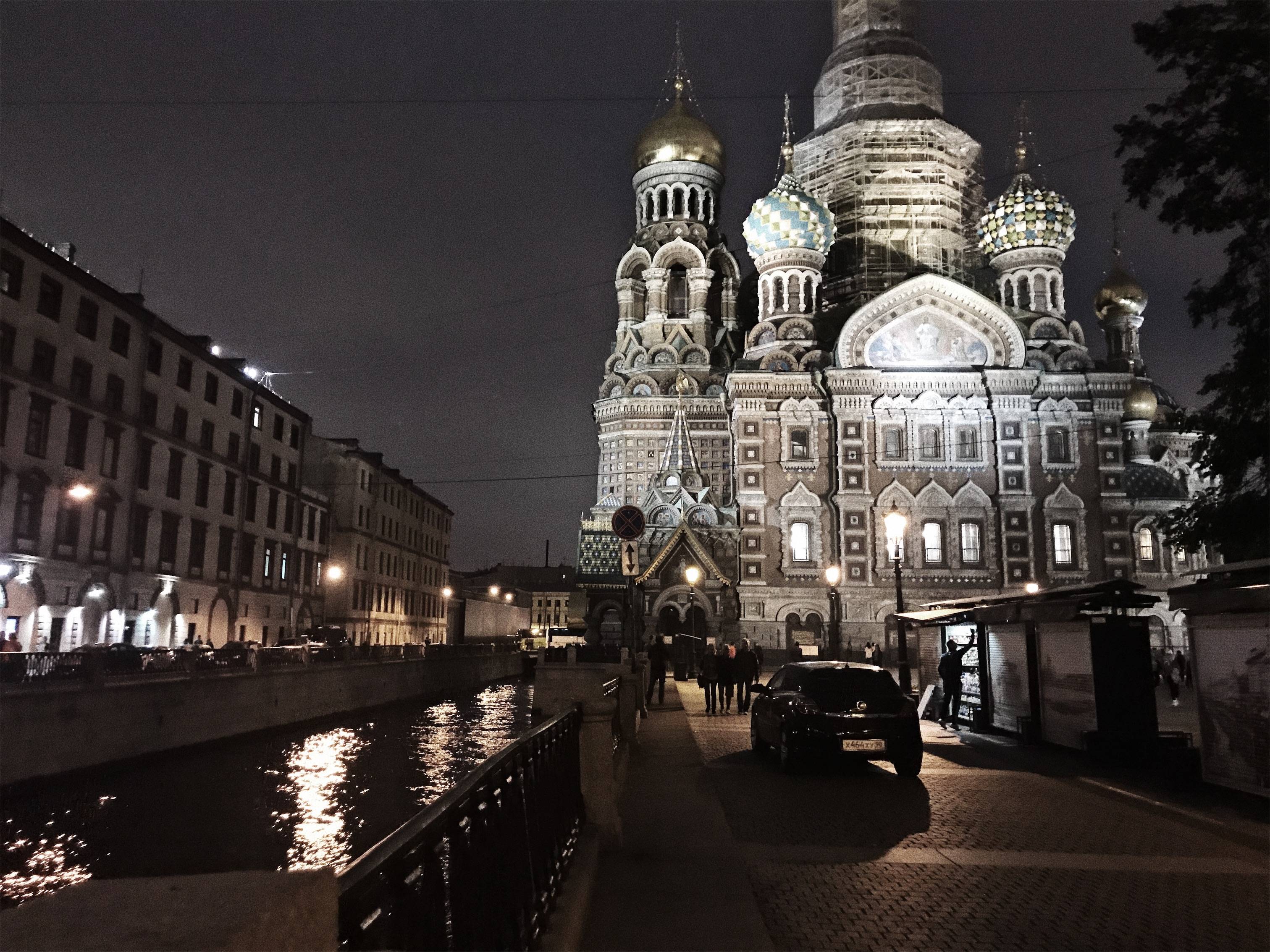 Spas na Krovi, aka Church of the Savior on Spilled Blood.

My last day in Russia was a lot of things. It was stressful, it was fun, it was full of nostalgia, but most of all, it was meaningful. I was responsible all semester and left every last bit of my packing to the last day — but there were still lots of fun things that I wanted to get done as well. My roommate and I initially planned to go ice skating, grab some dinner, and head back to pack all night. However, things didn’t go according to plan… and that’s how most great adventures start.

After leaving the metro stop to head to the ice rink, we realized a truly tragic piece of information: the rink was about a half hour walk away from the metro, and it was freezing cold. This is Russian winter, folks, and it lives up to its infamy regarding its cold temperatures. We trudged through ice and snow, routinely complaining about how we’d lost feeling in all parts of our bodies, and after a long treacherous journey, we finally happened upon our destination: Novaya Gollandiya, or New Holland. New Holland is a man-made island in Saint Petersburg, and it’s very popular with the locals. It has a shopping center in the shape of a donut, along with an ice rink. Tonight’s to-do? Ice skating… in the dead of winter. How much more Russian could it get?

We spent the next hour rolling around on the ice, or at least trying to do so. It was my first time ever being on ice, and I learnt a lot about myself in that hour of struggle. I was absolutely petrified about stepping out onto the ice with two hundred other speedy Russian skaters, but I insisted upon simply put myself out there. Starting at a mind-numbingly slow pace, I learned the mechanics on how to not fall on my butt and move forward — moving myself forward was actually the hardest part for me! I ended up having a lot of fun skating, even though I know that I’m still absolutely dreadful at it, simply because I had my friends to there to enjoy that first-time experience with. I truly think that even doing things badly is fun, as long as you have good company with you, and I think that having friends around me adds deep value to all of my endeavors.

After this, we went to Nevsky Prospect to pick up some last-minute souvenirs, and we bid our farewells to the Spas na Krovi, or Church of the Savior on Spilled Blood. Spas na Krovi is St. Petersburg’s most iconic church, and it is an absolutely marvelous beauty in person. It was an emotional moment for me, knowing that this was going to be my last time seeing the main streets and sights of Russia’s cultural capital for awhile. However, I tried to remain in the moment and soak up as much of Russia as I could, simply because I wanted to have these memories rooted in positive emotion, rather than simply feeling sad about having to leave. Then, we went to our favorite restaurant in St. Petersburg, but it was already 11 pm. They turned us away, saying that even though they were open until midnight, the kitchen had already closed down for the night. Another problem? The bridges in St. Petersburg close at 1 in the morning and open again at around 5, meaning that we had a super tight time to finish up dinner, unless we wanted to stay out all night. This was where things became… unexpected.

So yes, it was nearly midnight — but it was over an hour’s commute back to the dorm, and we were starving, and the metro was closing soon for the night at this point. We walked around the area, desperate for any kind of sustenance, and happened upon a 24 hour cafe! Looking at each other, we all knew we were thinking the same thing: what did we have to lose? We went in, ate some food, and sat back and relaxed as we enjoyed the atmosphere of the cafe which was bustling even at midnight. However, as our conversation continued, we quickly realized that it was now past the time that the bridges were closing, meaning that we were now trapped out in the city all night, and we were flying out of Russia in less than 12 hours with nothing yet packed! We tried to remain calm anyways, knowing that there was nothing we could do about the situation. Thus, we stayed in the cafe and let our conversations wind around and touch on deeper topics subjects, from emotional turmoil to the complexity of our true feelings about heading back home to America. After a long while of this going on, it was 3 in the morning, and we were getting tired, so we decided to ask our waiter when the bridges reopened. His response? It was Friday… the bridges don’t close on the weekend. We could have gone back any time we wanted.

We quickly called an Uber to head home, since the metro was still closed, but we were literally kicking ourselves at first for staying out that long for no reason when we could have headed back way earlier and gotten some packing done! However, as we drove through the dead silent St. Petersburg streets at night, it dawned on us that this had been a truly unique night, staying out all night simply relaxing in the peaceful company of fantastic friends. We arrived back to the dorm at around 4 in the morning, and I still packed a bit and only got around 2 hours of sleep that night. I still think it was completely worth it, though, to have had a great and memorable experience as my last night in Russia with friends that I know will last me a lifetime. I couldn’t have asked for a better final evening abroad.