UA in Italy, while in Italia

Nothing is more emotionally riveting than stepping off the plane walking and getting onto a boat to take you to your new home for the next month. Luckily, with my program type, we are going to be in different cities every week with several excursions that will take us to surrounding cities, but even still i’m incredibly nervous to be away for so long. I guess my nervous excitement wasn’t at all subdued because I got off on the wrong boat stop. Initially it was very daunting, but now it’s a cute joke. 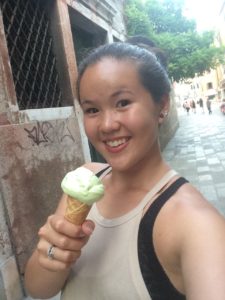 My first picture abroad ^^^ Featuring gelato!! My favorite thing about Italy so far is the incredible food. Everything is so rich and well done, and everyone is passionate about their restaurant and their livelihood. Its such a beautiful communion. 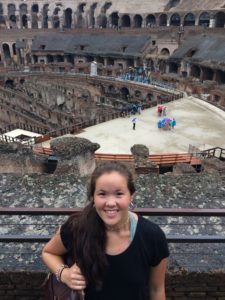 Classes were very interesting considering they all were in very nice meeting halls in hotels far from the ones we were actually staying in. I thought it was super interesting for us to have classes where they were laid out like conventions even though there were only 11 people in our class. With sparkling water on our tables and stationary sets, we talked about Shakespeare and his works in different Italian cities. It was an incredibly interesting topic. The downside though about classes was that sometimes we didn’t have actual class spaces set up for us and so we would have class outside or in the hotel lobby, and it was often very hot and we would be talked over by other people frequenting the spaces that we were trying to focus in… not ideal. My classmates were incredible though, and we all ended up becoming great friends. I’d do anything for them because they have helped shape me into a better person.

We went on a great deal of excursions, but my favorite was to Cinque Terrre. They are the five fishing villages of Italy and they are built into mountain sides that overlook the Mediterranean, and with that excursion we hiked ten miles from one village to another and it was like living in a post card. Everything was so incredibly beautiful and I cannot believe that I was lucky enough to be within that world that contained so much beauty and life.

I wish I had the opportunity to get to know more locals, but with the program type I had the people I was around the whole time were students from UA and so I didn’t truly have the opportunity to get really close to locals, that and we were in a different place every week. I did get to have short conversations with people from all over the world, some of with were from the USA some were from Britain, Australia, and Mexico. There was a beautiful amalgamation of  cultures all in this one hub of the world. It was inspiring to see that so many people came from all over to experience this place and these people.

I’m incredibly saddened to know that soon I’ll be leaving from such a beautiful country that has given the world so much. I’m nervous about returning home because I want to keep the friendships I’ve made here, and I am scared that we will go our separate ways when school starts. I love the people I have gotten to know while being here, and I can’t imagine being the person I am today without having had them each in my life. I am excited to see my family and my dog though, so I guess that is an upside.