When I decided to go abroad, my program offered me three different options for housing: residence, host family, or apartment. A good friend of mine studied abroad the semester before and encouraged me to do a host family. I figured a host family would be the easiest way to fully immerse myself in the culture. So I took a leap of faith a signed up for a host family. We were advised to bring them a small gift, something with our home city on it or that would be useful for them. Being from St. Louis, I decided to get her a kitchen towel with the Arch and other St. Louis things like the Worlds Fair on it. Other than that, I didn’t really prepare much else.

Going into the summer, I knew my Spanish wasn’t very good but I figured I would be able to muddle through. Upon meeting Isabel, my host mom, I found out that she knew no English. While it was challenging at times, it also pushed me to better my Spanish and learn basic terms in Catalan, her language. Every night she cooked us dinner. I no longer could just look at a menu and pick the most American thing. I got to eat a variety of food that I never would’ve tried before and ended up liking most of it. Spanish omelettes have quickly become one of my favorite foods. I won’t say that living with a host mom was without it challenges, no air conditioning took some time to get used to, but I can confidently say it was worth it. She became like a second mother to me and made living in a new city more homey. I will miss her so much and I would recommend choosing a home stay to anyone going abroad! 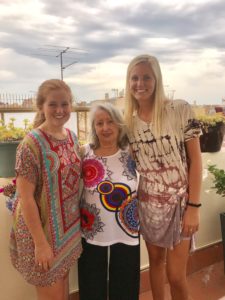