Highlights Sometimes Cover Up the Struggles 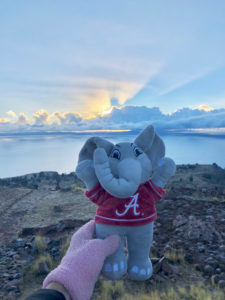 The past two weeks I have hiked 9 different Incan and Pre-Incan ruins, I’ve spoken Spanish 90% of the time, and I’ve explored the places and people of Cusco, Peru and the Sacred Valley. All of this has been a wonderful period of growth both academically and personally, but often times my social media and the points which I mention to friends and family are just the highlight real. There are as many lows as highs and it can be a struggle to tackle a new day after a big let down or change in plans. Thus, my goal for this blog entry is to share some of the highlights, of course, but also to make sure the realities and struggles are in the mix. When I read others’ experiences with study abroad prior to leaving, it seemed like smooth-sailing and absolute perfection. So when I experienced lost luggage, hailstorms and using the wrong words, it was easy to feel like the problem was me!

My time in Cusco began with lost luggage. Driving through the city to my host family’s house I felt distracted by the notion that I had made it here but my luggage was somewhere in between Cusco, Peru and Tampa, Florida. I felt stupid and alone BUT when I wore the same outfit the next day, and again the next day… no one noticed. My house-mate lent me some pajamas and extra socks and I began to forget I was wearing the same red dress with tennis shoes. As it turns out, several other students had lost their luggage and it became one of the first group-jokes of my study-program. Though I was excited by the news of my suitcase’s arrival, I was past the point of worry and “accepted” that I would have to buy more clothes in Peru.

Flash forward a few days and I am feeling incredible – no altitude sickness, no cold – and even though I was warned to not go to a higher altitude too soon or to overexert, I took my health for granted and decided to go for a hike 2,000 feet higher than Cusco (Already an 11,000 ft. altitude). The views were beautiful and I didn’t feel out of breath- I truly felt like I had a leg up on my classmates who had headaches and stomach aches all day. But, when I got back from my hike I had a semblance of a headache. I drank some coca tea and thought it would be a quick fix before going to bed. Four-a.m.-me was not in agreement with the me from before. I had a raging headache and felt like I was going to be sick. Not only had the altitude gotten to me, but it had gotten to me worse than it had most of my friends because I had decided to push my luck. It took a couple days to recover and I definitely waited the full week after that before going on another hike.

I went on several small hikes leading up to an entire weekend of hiking and was feeling great. I headed to Puno and Lake Titicaca to climb to the top of Pacha Mama on the island of Amantani. It was a difficult hike, but I was extremely disappointed to find that though the views from the lake were gorgeous, the surrounding clouds blocked a lot of the view on my hike up. It began to rain and the complaints from my fellow hikers poured in but after another 500 feet altitude increase, the rain turned to snow and THAT was magical. We played in the flurries as we made our way to the top and forgot the rain from before. At the top, we had 20 minutes of clear skies and beautiful vistas but in our preoccupation with the snow and taking pictures, we neglected to notice the pitch-black clouds imposing on our happy evening. We noticed far too late and began trotting down the hill. We had barely made it 20 meters when the hail caught us and we were by no means properly dressed. It was a freezing and awful run down and we were all frustrated that we hadn’t left earlier or noticed the hail. Instead of letting it ruin our weekend, we got hot chocolate and made plans to hike the mountain again the next morning for the sunrise. We left at 4:30 a.m. which was quite cold but thankfully not hailing. The sunrise was one of the most astounding I have ever seen and if it wasn’t for the hail spoiling the hike the day before, I’m not sure I would’ve gone.

Essentially, study-abroad has helped me to go with the flow a little more, worry a little less, and find sunrises in hailstorms. I am loving my time here overall and wouldn’t have had it any other way.