From Mountains to Sea Level: Back in the U.S.

I’ve now been back in the U.S. for two weeks, and though I was looking forward to spending time with family, it has been an interesting transition. I returned from Peru with an intestinal parasite and haven’t necessarily been living-it-up, but that aside, home has felt different.

First and foremost, switching from speaking Spanish 95% of the time for six weeks to English all of the time is a very interesting transition. I found myself still wanting to use Spanish phrases and even thinking of Spanish synonyms in addition to English ones. I was also surprised at how easily I forgot certain things and found myself struggling to think of a Spanish word. As one can imagine, I also found this discouraging and sad, but have since picked up Duolingo to keep my vocabulary sharp.

Family time also changed a lot from my time in Peru. Though my family here tries to eat together every meal, work schedules are hectic and lots of times we were missing one or several family members. In Cusco, if someone missed a meal it was a serious sin. Perhaps this doesn’t seem like much, but empty dinner tables felt much sadder and more significant than they ever have.

Something I never thought I would miss from Peru: taxi drivers. For clarification, I do not miss the insane driving styles and constant traffic, but I do miss the ability to hail a taxi anywhere and anytime.Taxi drivers are such a wealth of information and I learned so much about the city during my 20 min rides to-and-from the center. They taught me new words, about the government, and where I should go to eat. Though they always seemed surprised I was engaging with them, once the flood gates were open, they would chat for forever. Thankfully, many took money off my price just for being kind and trying my best. I also miss the haggling with taxi drivers. In Cusco, you agree on a price before you get into a Taxi and it was always such a rush to talk turn down terrible prices and surprise them by telling them no and requesting a better price in Spanish. In fact, the haggling and bartering culture in general is something I will miss dearly. I think it created a fun relationship between buyer and seller, and I learned so much from asking people about products and prices. I was amazed at how willing people were to share their knowledge and craft. When in Amantani, I sat and watched a woman doing embroidery work and I told her that I also enjoyed doing such work; so, she showed me her stitch pattern and let me work on her pillowcase for some time. Then, she gave me a better price on her other work just for listening and talking with her.

Overall, there are many elements of the culture that I miss about Cusco, Peru. However, there is something comforting and quelling about the familiarity of the United States. I am happy to be back at home and with family, where I don’t have to worry about strays or constantly think a little harder just to talk. But, I will surely be returning. 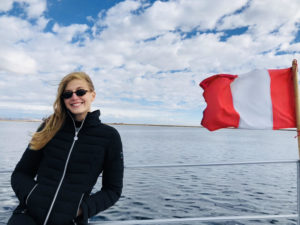 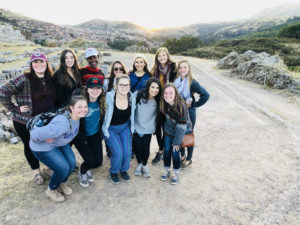