Our group event for Tuesday consisted of a tour of a vineyard in Chianti, about a 40 minute bus ride from Florence. Never have I gotten car sick in my life, but going through half the drive on bumpy, dirt roads and facing the opposite direction really took a toll on my stomach so of course I threw up behind a bush less than two minutes after we got off the bus. I was feeling a bit nauseous but when the wine tour began and we went deep into the wine cellars, the strong musky smells of aging wine and the cool air that surrounded us cleared my head and stomach in no time. After the tour we were lead to a dining area when I tried, for the first time, sheep cheese. It had about the same strong taste as goat cheese but with a sharp distinct taste at the end that made me grin from ear to ear. They let us sample a very special, aged balsamic vinegar that had the same viscosity and sweetness as honey that completely changed the taste of the cheese the second it entered our mouths. Our guide encouraged us to try the balsamic vinegar with the glasses of wine we were also sampling. The result was a much smoother taste. Naturally, I wanted to take a bottle of this magic balsamic vinegar home…until I read the price tag. For a 100 ml bottle of this balsamic vinegar it came to a total of 48 euros. Though, that price tag was justifiable: aged for 10 years and only 1% of the initial concoction ended up in the final product, I would have to pass. It was 24 gelatos vs. 100ml of vinegar so I of course followed my sweet tooth. 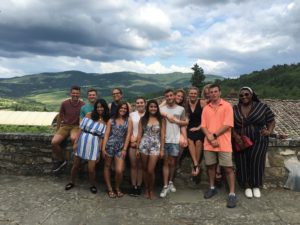