It’s almost time for my study abroad journey here in Japan to end, and I must say that I’m rather sad about it. I’ve made plenty of friends here over the year, and though a lot of them are going to leave while I’m spending the week in Tokyo, somehow I feel it might be better not to see them off. I know I’ll end up crying if I do. 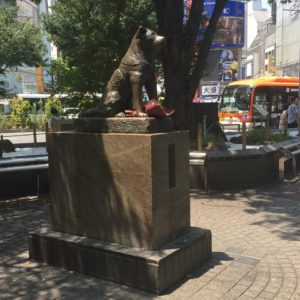 Unfortunately, it’s still pretty hot here in Japan at the moment. Every chance I get I’ve been ducking into shop or cafes to try and get some AC before heading back into the heat. But thankfully Tokyo has been a little bit cooler than Kyoto because of the breeze. Though I have to say, I’ve found a new appreciation for eating ice cream in the summer time.

Tokyo is a lot different from Kyoto, and somehow I feel like a country kid lost in the big city every time I visit. Sometimes quite literally… On my way to see the Hachiko statue and the 109 building, I instead ended up at the planetarium about 15 minutes away. Thanks to the staff there, I was able to turn around and head back in the right direction — but I also bought a ticket to see the show there since I was too embarrassed to admit that I hadn’t meant to end up there to begin with. It was a lot of fun to lay back and watch the star show though, even if everyone else was parents with their little kids. Afterwards, I even got to go to the library and read a little bit!

It was definitely good practice for my Japanese getting to do all of that by myself though! If nothing else, I feel that I’ve improved thanks to putting myself in real life situations where I have to use Japanese to communicate with other people! And thanks to my friends here, I’ve learned a lot of fun new words and slang too. Kansai dialect is definitely one of my favorites though.