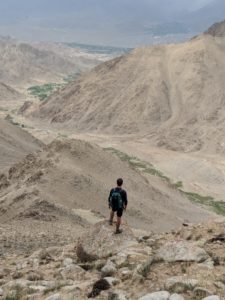 While I enjoyed my experience in India, I’m certainly glad to be back in the United States, where people actually mean it when they set prices and where drivers actually use lanes! When I got home, I felt a bit like Tony Stark in Iron Man getting back to the United States. The first thing he did was go to Burger King to eat an American cheeseburger. I did a similar thing; in fact, I ate an entire pound of beef as soon as I left the Birmingham airport.

I can’t say I would recommend the trip to the claustrophobic among us, nor would I recommend it to those who value personal space. On two separate occasions, street salesmen actually touched me with their products in the hope that I would be persuaded to buy them. One of them was a hat salesman that put a hat on my head! I had half a mind to walk away with it and pretend to think he was giving it to me for free.

India only has one third the land the United States has, and they have one billion more people! Yet we’re the ones constantly moaning about overpopulation and not being able to afford kids. I had the privilege of meeting many families in the course of the trip, and most of them had plenty of children yet lived on a fraction of what a “middle-class” American family would. Despite this, they were happy and content! On one occasion, a family living in an apartment asked our group of students what makes Americans happy upon being asked if they had any questions for us. After around five seconds of stunned silence, we offered lame appeals to family, materialism, and achievement. It hit me like a thunderbolt in that moment that wealth really can’t bring one happiness. The United States could learn a few things from India when it comes to that.

It’s very easy to take the wealth in the United States for granted if you never leave it, and I’m grateful for the increase in my thankfulness for the everyday blessings in my life that others simply do not have.

My advice to future students who decide to study abroad is to have a “When in Rome” attitude. Try all the food, do the things, and immerse yourself in the culture, insofar as an American can. No need to be melodramatic about being a “changed person,” you’re going to be the same person before and after, but you will now have some incredible experiences under your belt and you will learn a metric ton if you pay attention. Make the most of it! I can promise you that you won’t have much fun if you have an uptight, boring attitude, which is easy to have when entering a vastly different environment.