So there we were, high in the beautifully scenic mountains of Spain, huddled in a pack, trying to nominate the unlucky member of our group who would walk up to the nearest Spanish local and ask him to take a picture of us. Out of our group of seven girls, one brave soul stepped up and announced that she would be the person to take one for the team. We all thanked her and encouraged her as she pondered the proper words in her head for a moment, took a deep breath, and stepped up to tap a man on the shoulder.

“Oh! You want me to take a picture of all of you! Can I see your phone? Say cheese!”

We all collapsed into laughter, our faces bright red with the tint of embarrassment. As if it’s not bad enough to know that you sound like a third grader, having a Spaniard respond to you in perfect English is one of the most humbling experiences out there. Of course, this incident was one of many where our best Spanish efforts fell flat or seemed insufficient compared to the English speaking capabilities of many of the Spanish. Often, our pronunciation was horrendous, our grammar was pitiful, and our words were sometimes not even actual Spanish words, but dadgummit, we tried. We tried the whole trip. Every encounter was a potential learning experience, and we wanted to make the most of it.

Our trip to Spain was specifically for Spanish majors and minors, so all of us knew ahead of time that we would be expected to speak in Spanish throughout the entirety of our program. For me, a student who had only completed up to the Spanish 202 course, I was worried that I would not be as prepared as other students. I figured that the trip would go one of two ways: it would leave me far more fluent, or I would spend it veryyy quietly.

Luckily, I was pleasantly surprised with my ability to communicate. Naturally, the first few days were a little rocky and I had many embarrassing slip ups, but I returned from the trip far more confident in my Spanish. I left the United States only able to read the language and understand small parts of what my teachers said, and I returned feeling comfortable having conversations with native Spanish speakers. By no means would I consider myself fluent as this point– I still have a long way to go. However, I feel that I have conquered the insecurity that was holding me back from improving.

In my Spanish conversation class in Spain, my teacher had meetings with each student individually after our oral presentations. He asked me how I thought my presentation went, and I told him that I thought I was awful at public speaking in Spanish. I felt like I would forget everything I had planned to say and that I was nowhere near good enough to improv. I assumed that I had made tons of errors.

He surprised me with his response. He told me that he could tell I was more shy than other students in the class to begin with, but that I was self-conscious for no reason. I was much better at Spanish than I thought I was. I realized that the only thing holding me back from speaking more was my own fear. I’ll never forget our conversation– it almost made me emotional.

My experience in Spain taught me that learning a language is hard for everyone, and that mistakes don’t mean that you are failing– on the contrary, they are a sign of progress. So, I want to leave two bits of advice for anyone wishing to pursue the study of another language. First, don’t let mistakes shut you down. Instead, use them to learn knew things and to improve. And finally, really consider a trip to a country where they speak your language of study. I grew more in one month abroad than I think I did in two years in the classroom, and I’ll never forget the wonderful things I saw and the marvelous people I learned to communicate with. 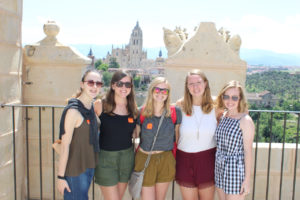