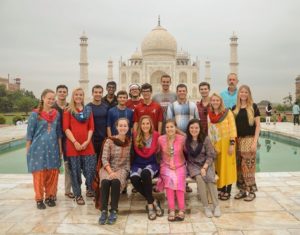 The first thing that stuck out to me as odd when I initially arrived in New Delhi was that traffic in India was much now disorderly than in the United States. Our contacts in India had arranged for taxis to pick up students as they arrived at the airport. As we were being driven to the Hilton we were staying in, I noticed that cars didn’t actually use lanes, often driving in the middle of the road despite the fact that lane dividers were clearly drawn on the roads. There was also constant use of the horn and continuous cutting off of other people. I think the first picture I took after I arrived was of the city as we were driving to the Hilton.

I wasn’t sure how much I was going to like Indian food, but it ended up being one of my favorite parts of the trip. I especially love the spiciness of the food. My major is Computer Science, but I think if that doesn’t work out for me I’ll be opening an India themed restaurant.

Due to the theme of my particular study abroad trip (Reverse Innovation), I’ve had the opportunity to meet a wide range of Indian people, from tribal people up to upper middle class government workers. There are some stark differences in culture between India and the US. For example, arranged marriage is still a common practice in India. In fact, it’s the majority of marriages. Their term for the exceptions is “love marriage.” In general, however, India is more collectivist and family centric than the United States. Often, it’s hard for people to get ahead, because they feel obligated to bring their family with them rather than just leaving to become a success. Indians also have very little regard for personal space. On three separate occasions, street vendors touched me with their products without permission, and people have shoved past me many times. Speaking of which, someone was always trying to sell us something when we were walking around, and we were advised that they make the initial price far more than the item is actually worth. Bartering is essentially a way of life.

Disorder permeates India, both physically and metaphysically. They have hundreds of languages, their wiring is a mess, their city planning is almost non-existent, and their regulations are few. The smell is much better than I thought it would be, but it is certainly no picnic in some areas.

When I go home, I’ll be taking two very nice chess sets and an assortment of other trinkets. I’m glad I went on this trip, because it exposed me to a culture previously alien and unknown to me and I have learned a tremendous amount.