I was very excited to get to Denmark after 2 weeks of backpacking. Thankfully, I arrived with two friends who were also in the same program, and met up with a few more that first night. After arriving in Copenhagen, I couldn’t help but smile and appreciate how beautiful the city was. The first picture I took was of the canal and colorful houses in Nyhaven. Our first night was an adjustment to how late the sun actually sets, and even later until it’s considered dark outside. We met a group of recently graduated high school students. We had seen a lot of people wearing white hats, and the group explained it’s part of the tradition of graduating their equivalent of high school. They have a series of traditions and events that take place over a week to celebrate the accomplishments. One of which is driving to each of their classmates homes, meeting their families, and all caravan in a converted military vehicle driving around the city playing music and celebrating. The locals are definitely my favorite thing about Denmark. Everyone is genuinely friendly and willing to help if you talk with them. Most people live outside of Copenhagen and commute using the metro or bus system. Most of the people I met have been students either in school or finishing up and getting ready to work and go on holiday before continuing classes. Me and another student in our program were temporarily moved to a different dorm than the rest of our group on campus. All the Danish students were kind and helpful in transitioning, figuring out the facilities, and providing directions. I think I’ll miss being able to start up a good conversation with a stranger easily the most about Denmark.

Things shifted gears when classes started. It’s a very rigorous course for chemical engineering, and wasn’t going to be easy. Most of the experiments are self run, with Danish TAs and faculty assisting only when need be. The way the class works is 2 people are partnered up and run 6 experiments. There are 26 students from Alabama, and around 60 more from different universities. This class is not the traditional class room learning setting, but more of independent work. Each group ran their own experiments and went from there to write the lab reports. The lab manual we were provided was translated from Danish to English. This led to a few complications, as interpreting all of the questions and procedures for the experiments was sometimes difficult because of translation issues. The Danish grading guidelines are also more difficult. For example, making a C at DTU is considered doing well in the course, as most people do not make As. Taking the class here required some adjustments in work ethic, time management, finding where to get certain information in a foreign place, learning how to use a keyboard and translating commas to decimals in Excel files (arguably the hardest part).

Most people in Denmark know English, and the language barrier was not very difficult when talking to faculty and locals. Some general phrases or metaphors I have used I have had to change up in discussion to convey what I mean. As I’ve wandered throughout Lyngby and the rest of Denmark, I’ve picked up on some Danish phrases and mannerisms to get by more. I went to a movie here that was in English with Danish subtitles, which was helpful in getting a better understanding of the language.

Our group has gone on several execursions. In the beginning, we did a food tour of Copenhagen, a canal tour, outing to Malmo, Sweden, Hamlet’s Castle and Helsingor, Sweden, and various trips to downtown Lyngby and the mall. We were given Copenhagen cards which provided free access to various places in Copenhagen and usage of public transit. For the Denmark world cup game, we went to Tivoli, an amusement park, to watch the game. We returned there later in the week to go on some of the rides. We ventured to Malmo, Sweden with our professor for an afternoon and evening exploring a new city and country that wasn’t too far from our program. Our trip to Hamlet’s Castle was spontaneous, and when we were there we decided to take a quick ferry ride over to Sweden for about 2 hours just because. I’m writing this currently from Vienna actually, as this weekend myself and a friend are travelling to Budapest, Vienna, and Prague.

This upcoming week is my last in Denmark and of class. Our final lab report and cultural presentation are due Monday at 12 pm, with presentations on Tuesday and Wednesday. Now that it’s almost time to return home, I’ve started packing and cleaning up my room. I’ve collected post cards from most of the places I’ve visited on this trip, and a few extra souveniers from Denmark to bring home (a futbol scarf, Danish flag, and coffee mug). I’m feeling sad that my trip and travels are coming to an end, but also excited to get re acclimated to a normal routine and the comforts I have at home and not abroad. Our program finishes Thursday with a tour of Carlsberg Brewery and send off reception. Then Friday, before heading back to the US, a friend and I are headed to Venice and Rome until Monday. I was excited and anxious to get abroad, and I’m feeling that way about going home after almost 2 months away. I’m thankful for the opportunities to travel and finish up my undergraduate career in Europe. 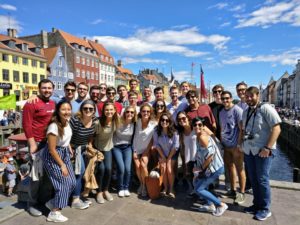 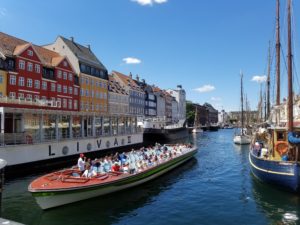 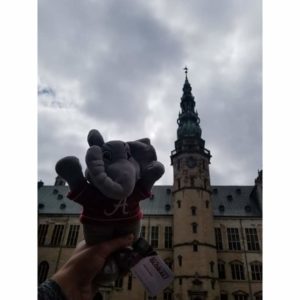