Well… a lot has happened in the last 2 weeks so here it goes:

Day 1-2 – We were all quite exhausted when we arrived so we spent the first day in Accra resting and relaxing. The second day was Republic Day so we visited the monument and museum for the first president, the University of Accra and the medical school.

Day 3 – We spent the morning exploring Elmina (the city where we stay and work). In the afternoon we visited Assin Manso, one of the main slave markets during the slave trade.

Day 4 – We began the day with orientation at our 3 different hospital sights and celebration of Bakatue. This is the festival of the opening of the fishing season and the lagoon where all of the fishing boats are docked. Elmina is one of the main fishing ports of the country and has one of the most interesting fish markets I’ve ever seen. During the festival, the chiefs are paraded through the town and the paramount chief opens the lagoon by casting out a net three times and having boat races.

Days 5-7 – We spent the first three days working at the district hospital in Elmina, shadowing doctors and meeting patients. In the afternoons we have gone to Cape Coast, walked around Elmina and adventured to the shell station. Friday afternoon we headed to Axim, Ghana to a beach hotel where we stayed the night.

Day 8 – We visited Nzulezo, better known as the village on stilts, and the childhood home of Kwame Nkrumah, the first prime minister and president of Ghana.  The people use the water around them for drinking and go to school through 6th grade in the village. After they finish 6th grade, they canoe to the mainland for schooling. Most of their trade and work is done in the village with minimal travel to the mainland unless trading with the closest villages. They do not have a doctor but rather bags of herbs given and used based on the symptoms presented.

Day 9 – We visited the Cape Coast and Elmina Castles. The Cape Coast castle was built specifically for the slave trade and then was used by the British following the creation of Ghana as a British colony (which they didn’t not gain independence from until 1956). The Elmina Castle was built by the Portuguese, then taken by the Dutch. It was also bought by the British prior to the colonization. From there we went to the national professional league soccer championships where the Elmina Sharks and Heart of Oaks (Accra) teams faced off. After a battle of a game it ended in a tie and eventually PKs where the Elmina Sharks won.

Day 10-14 – We completed our first rotation at the Ankaful Leprosy and General Hospital this past week. I spent my time in the Children and Women’s ward taking vitals, assisting the doctors in treatment and talking with patients about life, their families, and where they have come from. I also spent a day at Ankaful Psychiatric Hospital. In the afternoons we have been going to Christ Cares International School and assisting in teaching reading, natural science, and phonics (for the younger students). Afterwards we stay for the girls club, a time where the girls in the school have a time to just be girls (do crafts, learn how to sew and cook, and talk about girl stuff). These children are so full of joy and have a thirst for knowledge. They love to dance and sing and are always happy to give hugs, high fives, and to hold hands. Many of the students main language is Fante, but have been learning English as it is the national language. The teachers help translate and have taught us basic Fante expressions to allow us to interact with the children individually. The teachers have been incredibly welcoming and joyous in their work.

Day 15 – We started the day by going to the Kakum National Forest and doing the canopy walk. We were approximately 110 feet above the ground amongst the trees of the rainforest on bridges and nets. The views were stunning.. From there we went to an animal sanctuary and met some monkeys that really liked watermelon. Afterwards we had lunch as a hotel right along a large lake inhabited by crocodiles. I fed a piece of meat to a baby crocodile, unaware of the larger crocodile just feet away! They were huge, but so graceful as they swam! Afterwards, we did a walking tour of the city of Elmina. The tour ended at the top of the Dutch Fort on top of a hill looking out at the lagoon and the entire city. You could see for miles out into the ocean and into the city.

This trip has been packed full of different experiences and learning. The people so far have been incredibly kind and welcoming to all of us, making us feel comfortable in our temporary home. I am looking forward to the weeks ahead and all that is left to learn and explore. 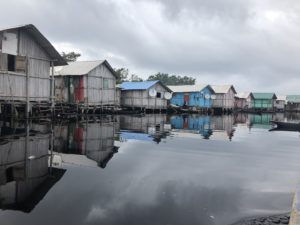 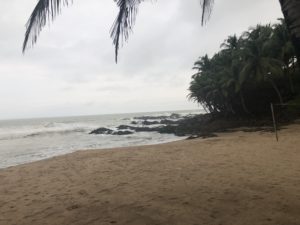