Lovin Dublin: The Repeal of the 8th Amendment in Ireland 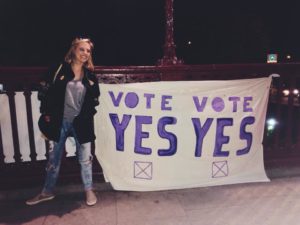 If you are unaware of the current events in Ireland right now (don’t worry, you’re not alone!), but it would definitely be worth your time to google the 8th amendment. In 1892, the 8th amendment was added to the Irish constitution, which illegalized abortion. And 2 Fridays ago, the country had a vote to repeal it, which passed. This is a giant feat for the country of Ireland, as women finally feel their voices have been heard after being shushed for so long. The very first thing I noticed coming into the city were the giant signs plastered on sign poles and buildings, screaming YES and NO at you. It was impossible not to notice them, along with the campaigners who stood at every street corner with their YES and NO paraphernalia. The “no” signs were quite pleading and graphic, stating, “If killing an unborn baby at 6 months bothers you, then vote no.” Then, with a picture of a fetus, “I am 9 weeks old; I can yawn and kick; don’t repeal me.” The one that was most unsettling to me was also a fetus, with hands in a praying gesture, saying, “A license to kill? Vote NO to abortion on demand.” The “yes” posters on the other hand said things like, “Sometimes a private matter needs public support”, and “Our bodies, our choice”. My favorite one simply stated, “Stop shaming women.”

We arrived in Dublin on a Tuesday, and the vote was that Friday. The country was tense, and it was palpable. Our first few days of being in the country, my group and I would enjoy our lunches in a park, where “yes” campaigners would eagerly hand us their badges (which I wore proudly on my shirt, even though I obviously couldn’t vote). As the vote drew nearer, campaigners became more adamant and prevalent. I asked around to random Irish people I met (in pubs, on the bus, our tour guides) on which way they thought the vote would turn out. Granted, the people that I struck up these conversations with were out and proud “yes” voters, but it seemed pretty split in half to me. Even some people who voted yes thought, because of the Catholic prevalence in Ireland, that the amendment still might not be repealed. I was awfully excited to see how it would play out.

The Friday of the vote, the campaigners were everywhere. The air was tense. Badges were worn on so many people’s shirts, jackets, and bags. That evening, I found myself in a pub, where my friends and I befriended an Australian journalist in Ireland covering the referendum. As the night went on and it looked like the repeal would indeed pass, we watched women around the pub exclaim with joy, squeeze their loved ones, toast, and cry. I met a woman who told me the story of Savita Halappanavar, whose face was plastered around the city on different “yes” posters. Savita was a pregnant woman in 2012 who was denied an abortion, even though her health was failing quickly, and who died within the week. The death of Savita caused an uproar in Ireland, and pushed the “yes” movement forward. The woman who shared Savita’s story with me was near tears when explaining how there have been cases in Ireland where pregnant women who had cancer were denied chemotherapy because chemo would cause harm to the fetus.

I was obsessed with Dublin the moment I got here, and to be here during the repeal of the 8th amendment has been something truly incredible. To the women of Ireland, I’m overjoyed that your voices have been heard and it’s been an honor to rejoice with you all.