Finally got to see the Eiffel Tower in person!

The Eiffel Tower was even more overwhelming than I thought it would be. Many people I knew that had been to Paris before had told me that it was under whelming and small, but boy, they were wrong. I think this was the day that I finally realized that I was in Paris, France.

I anticipated this event all day. During class, I “under-dressed” so I could freshen up once I got home. I wanted my photos in front of the Effiel Tower to be spot on! We had been talking all day about going all the way to the top and I was very exited to see all of Paris from the very top of the tower. Unfortunately, when we first got there, the very top of the tower was closed, and we didn’t know how long it would take for it to re-open. All of my group members and I were super bummed out since a few of them had talked themselves into facing their fears and going all the way to the top. As we stood in line we finally got towards the front and miraculously, the top re-opened! We all then piled into the small elevator and went to the second floor. Here, we took many photos of our view and played a game of “I Spy,” trying to find the different famous monuments of Paris. After an hour or so on the second floor, a few of us piled into the elevator again and went all the way to the top. The view from the very top of the Eiffel Tower was even more breathtaking than the second floor view. You could see for miles around, and could even see the airport. 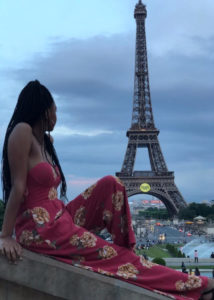