Why study abroad in Asia? 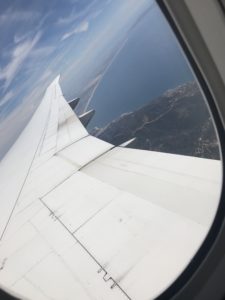 A year ago when I was deciding where I wanted to attend college, my school counselor laid out a list of common deciding factors that were supposed to help me decide. There were the obvious ones like the location of the university and its surrounding atmosphere, the types of majors the university has, and the overall campus life. Then, there was study abroad programs that a university offers.
Study abroad?
I wasn’t interested. Definitely not a deciding factor for me. I’ll be just fine studying at the university I choose. That was that, and I was okay with it until the study abroad program: UA in Asia: Innovation and Entrepreneurship in Vietnam (Hanoi and Ho Chi Minh City) and China (Shanghai and Shenzhen).
Significance: I am part Chinese and Vietnamese. My mother’s family immigrated from Vietnam during the end of the Vietnam War. I have never been to either country, but I have always had a strong tie to the culture through my family’s oriental traditions. We celebrate Chinese New Year. I wear the traditional Vietnamese dress on special occasions. I’ve grown up being taught how to prepare certain Asian dishes, just as my mother did, but I’ve never been to Asia.

Wow! Not only would I get to learn about something that I’m interested in, but I’d get to do it in the countries that I have familial ties to. And it’s during May Interim, so it won’t interfere with my degree plan or any summer plans.
But it was a pipe dream, never in a million years would I think that everything would fall perfectly into place. That right 38 hours after finishing my last final of freshman year that I’d be on a plane to Shanghai of all places to meet up with my professor and 11 other students.

Since I’m on a plane almost to Shanghai, shouldn’t I be able to answer: how does one prepare to visit a country for the first time that their mother immigrated from when she was ten years younger than you are now? Yes, but I can’t answer it. I have packed and repacked and repacked again just to make sure that I have everything, and I do. In terms of tangible things, I am prepared. Though emotionally, I am not prepared, and I don’t know how to be. Everything just seems so surreal. So many thoughts are running through my head. It’s really scary going overseas to countries that are very unlike the United States. What if I forgot something that I didn’t think I’d need until I need it? What if I get lost? Me and running around lost do not make a good combo. With all the nervous thoughts swarming my brain, my level of excitement is actually increasing exponentially outweighing everything else. I am excited to experience the culture, taste the foods, visit the sites, and learn about the differences between Asia and America. And, man, oh man is it gonna be so amazing! No matter what happens.