On May 10th I arrived at Hartsfield-Jackson Airport in Atlanta, Georgia,eager to get my journey to Prague started. I knew my layover at JFK in New York would be tight, as it was only scheduled to be an hour long. Our departure time from ATL got delayed by 35 minutes, and the layover became even more tight, but still doable. After a bumpy take-off, we were finally on our way and all was well, until the pilot came over the speakers;”Sorry about this folks but there’s some bad weather in New York, so we’re having to circle about 45 minutes outside the city” he informed us. Well the circling lasted approximately 45 minutes, until the pilot came back on to tell us that we were low on gas, and would be making a brief stop in the city of Hartford, Connecticut to refuel, and would then be on our way.  After being on the ground in Connecticut for approximately 10 minutes, someone from the flight crew enlightened the passengers that our pilots had been flying all day, and that it was now illegal for them to fly anymore. It was nearly 10:30pm, and our connecting flight was already boarding, but delayed. He went on to state that it would be nearly 5 hours before a new flight crew could be there to fly us to New York, but we could be given a voucher for the two and a half hour taxi ride from Hartford to JFK. About this time, an individual in the row behind me leaned up to ask if I was going to Prague with the University of Alabama, as I told her I was, we learned there was a total of four people from our trip on this plane. So my new found friends and myself exited the plane and embarked on an adventure that will not soon be forgotten. 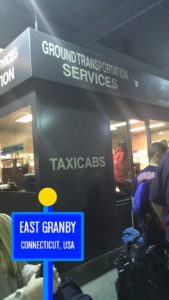 Taxi stand at the Connecticut Airport 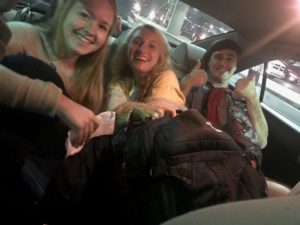 After waiting in line for a cab for about an hour, a Toyota Camry came to the rescue. As I opened the passenger side door, sprite bottles and other garbage fell to the asphalt, and I knew this was going to be an interesting ride. During our wait, one of our group member’s fathers had generously called our airline and got us scheduled for another flight departing from JFK at 9:00pm the following evening. I had never been to NYC before, so I was actually excited to some of the city during our stay. We finally got to our hotel around 2:00am, and were all eager to get some sleep. After briefly exploring Times Square the following morning, we got in our Uber to the  airport. Another interesting driver, Roy (name changed for legal reasons) told us about his 13 month stint in a Jamaican prison, his life in racketeering (his words), as well as the time he broke another individual’s arm. We arrived at the airport safely, and quickly bid our new found friend Roy adieu.

After approximately eight hours of flight time, we began our descent. Clearer and clearer I could see the city of Prague, until we were low enough that I could see inside the windows of the airport and it appeared we were about ten feet above the ground. Finally, our journey had come to an end, or so we thought. Suddenly, without warning, the nose of our plane points back towards the sky, and the windows I could once see in were now thousands of feet below me again. The pilot came over the speaker (which I now automatically associate with bad news) and said,”sorry about that folks. There is not a problem with the plane” (because that’s obviously what we all want to hear). “We had a bit of a separation issue, so we’re just going to take a quick lap then go back in for another landing.” The next landing did not go any smoother; however, the plane did stay on the ground this time. Finally, after nearly twelve hours in a plane and nearly 6 hours in cabs, Ubers, or buses in the past 48 hours, we were greeted by the familiar face of our professor in our terminal in Prague.