The study abroad faculty-led program that I chose took us around China and Vietnam. We started in Shanghai, China where we learned about the cultural aspects of China and its people. We also visited one of Colgate’s factories: Colgate Sanxiao in Yangzhou City. Then, we took a plane to Shenzhen, China. We spent most of that whole day traveling to Shenzhen, and the program allowed us to have the rest of the day to explore the city. However, some of us decided that it would be really cool to travel to Hong Kong instead, which was extremely close to where we were staying. None of us had been to Hong Kong before and we wanted to go on the Peak Tram and the Star Ferry, so a couple of us ended up going. We left from the airport while the others went to the hotel. We took a bus to the border where we went through customs. The ride was long, and we had to go through a long tunnel that seemed endless. However, we made it through the never ending bus ride. Once we got through Chinese customs and got our Hong Kong visas, we transferred to another bus that took us to Causeway Bay with the help of a kind English speaking Chinese businessman named George. We traveled through the countryside on this bus. Seeing all the vegetation and mountains was worth this the second two hour bus ride. This bus dropped us in the center of where we wanted to go, but we were nowhere near the peak tram. We ended up figuring out with the help of a kind couple about how to get closer to where we wanted by getting on a trolley. Once on the trolley, we met an amazingly kind lady named, Naz. She stepped off the trolley with us and took us directly to the Peak Tram Station which was an incredibly kind gesture to complete strangers. The Peak Tram was unbelievable. It went up the mountain almost completely vertical. You had to sit down to keep from basically sliding out the back of the tram. We looked out over the city, and the view was breathtaking.  Once at the top, we viewed the top of the city from a lookout before we had to go back down to not miss the last metro back to China. 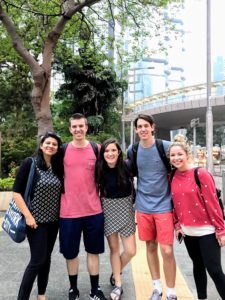 We didn’t have enough time to go on the Star Ferry that night, which has been named by the National Geographic as one of 50 ‘places of a lifetime’. It has carried passengers from Hong Kong Island to the Kowloon Peninsula since 1888. However, we ended up going back to Hong Kong again with another group to go on the Star Ferry in between one of our classes and dinner. Going on the Star Ferry was kind of like my star struck moment because I had seen the Star Ferry in a lot of late 1900s and early 2000s movies, but it was so surreal to actually go on something that you’d think that you only see in the movies. In addition to the incredible day, we got to go on the world’s longest outdoor escalator system that was 800 meters long consisting of a chain of moving stairs and walkways in the Central business district of Hong Kong.

On the world’s longest outdoor escalator system in Hong Kong

Traveling away from our study abroad location in China to Hong Kong was so worth the extra six hours of traveling on plane, bus, train, metro, trolley, and tram. It was interesting to visit a place in Asia that reminded me so much of being back in the United States. Most people spoke English, which was an anomaly from the past four days where almost no one spoke English. Some signage was even strictly in English. To the group of us traveling, it felt more westernized than we expected. Hong Kong was truly incredible, and everything I dreamed it would be.