Before last month, I used to say that I was scared of heights, of spiders, or even public speaking.  Then, on a weekend trip six hours away from my program’s city, I ended up in a French hospital, thinking I had appendicitis. Being sick and thinking there’s a chance you’re going to go into surgery is scary enough, but not knowing what the doctors are saying to you–limited knowledge of English/French doesn’t help when speaking in medical terms–feels like a high stake game of Risk.

All that being said, I’m okay and didn’t end up needing surgery.  I didn’t even end up having appendicitis, but I won’t say that the trip to the hospital wasn’t necessary.  In fact, it’s super important, no matter how scary it is to think about, to take the precautionary steps when it comes to your health in a foreign country.  If I would have ignored the pain I was in an it had ended up being serious, I could have been in a lot more trouble than spending a day in a French hospital.

So my only full day in Strasbourg, France was taken up by hours of tests, visits to specialists around the hospital, and a lot of waiting to see what was wrong with me. But the thing to realize is that we’re not invincible, even though we’re out in the world and experiencing new things.  Sometimes, that means taking time out of your trip, out of an adventure, to take care of yourself. It’s not the most fun, but it is definitely the most beneficial.  After all, traveling isn’t fun unless you’re healthy enough to do it, and when you’re healthy enough to travel, it can really count for something. 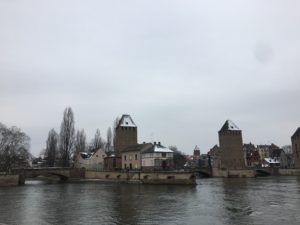