Berlin with other Exchange Students 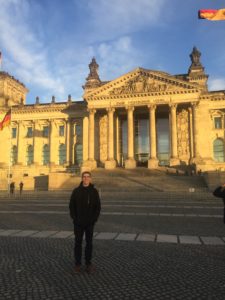 Over the Christmas break my Finnish roommate and I went to Berlin to celebrate New Years Eve with some Mexican, Russian, and German friends that we’ve met since being in Stuttgart this semester. We were amazed at how huge the city was and decided to explore the city just by walking around. We found the Brandenburg gate completely by accident, but sadly it was closed. After that we stumbled upon Germany’s capitol the Reichstag which is pictured behind me in the photo. Despite my years of learning German and my previous four months using it every day, nobody in Berlin would speak German with us as soon as they heard my English accent. In many restaurants, they even have English as the main language because Berlin is just such an international city. There is cool graffiti everywhere in the city, and it seemed to be a law to get rid of any graffiti because it is so ubiquitous. After visiting all the touristy areas such as Checkpoint Charlie, we went to the “hip” parts of Berlin like Neuköln and Kreuzberg and we found tons of interesting restaurants to eat in, one of which was run by a few friends from America who decided to move to Berlin one night, and found themselves there the next week. Our German colleague who came with us was originally from Berlin, and he was amazed at how fast the cityscape can change in just 6 months. Every time you visit Berlin, you can be guaranteed to see something new.