While Abroad in Berlin, Prague, and Budapest 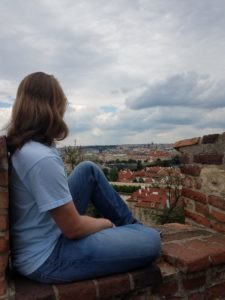 So far my study abroad in Berlin has been an amazing experience and has given me so much more than I could have ever anticipated.  From my previous post, I imagine I sounded like a nervous wreck telling myself that I wasn’t going to be alone in this adventure and reassuring myself that everything would work out okay.  Luckily, this was exactly the case for me and I’ve been able to meet new friends that have helped dampen these feelings of anxiety and stress.  One of the most nerve wrecking about this trip, having been raised mostly in the suburbs of Birmingham, AL, was experiencing an urban lifestyle in the metropolitan behemoth that is Berlin.  It was very intimidating when I arrived and it seemed difficult to navigate but after actually experiencing the metro systems (U-bahn and S-Bahn) as well as the bus systems it is very simple to navigate now and I can easily find my favorite restaurants, grocery stores, shopping outlets, and tourist attractions.  I knew I would experience being thought of as a native German due to my appearance and it’s funny to me how many people approach me speaking German and it honestly makes me feel like I really do belong here and makes me feel more comfortable.

I haven’t just stayed in Berlin though, so far I’ve also traveled to the Czech Republic and to it’s capital, Prague.  A little more than half of our group went to Prague via train from Berlin which took about four hours.  Prague is like a picture book and you can immediately tell how old it is and how rich it’s history is just by observing the building around you on the street.  My favorite part of the trip to Prague was the hike up to St. Vitus Cathedral which gave my friends an I a spectacular view of the city below.  For our next excursion, we visited Hungary and it’s capital, Budapest.  This time only two of my friends and I chose to go here and it was one of the best experiences I’ve had so far in my travels.  At around this time we were all very well acquainted with the metro system of Berlin that Budapest was very simple for us to navigate as well. Almost everything in the city resembled something from the Cold War era when Hungary was a satellite state of the U.S.S.R. from the subway cars, to the escalators and elevators.  It felt like we had gone back in time fifty years and was a very unique experience I don’t believe I could have gotten anywhere else.   The place we were staying had a huge atrium in the center of the building and was breathtakingly beautiful.  Even though we visited several museums and went on tours I think my favorite part was just experiencing the city and its heritage that comes from its rich history from being part of the Ottoman empire, the Austria-Hungarian empire, being under Nazi control, and then a satellite state of the Soviets and of course retaining it’s own Hungarian culture through all of that. One thing I did not intend upon returning to Berlin was that each time it felt more like I was actually coming back home.  I felt like I really understood the city and was confident that I knew where I was going and what I needed to be doing.  I’m not sure how it’s going to feel when I return home to the United States but I will be returning next week and look forward to writing about that experience.

Thank you for reading,