Naturally, I arrived in Berlin via the airport—the famous Tegel airport. I was expecting to find an airport that met the stereotypes of Germany: clean, efficient, and modern-to-the-point of coldness. Instead, I found an old airport with a poor layout that could barely handle the number of harried travelers trying to make it to their destinations without losing all their baggage.

The biggest immediate shock was the weather. I had flown from warm, sunny Athens (Greece) and when I stepped out into the dreary and drizzly Berlin weather, I was—as the kids say—shook. I had to figure out Berlin’s public transportation system by myself, which was stressful. Berlin isn’t a huge city, but they offer SO many different options for navigating the urban jungle: buses, trams, and two different types of Bahns: S and U (U being the subway system). The obvious benefit is that you’re never too far from anywhere you could want to go. The one downside is that it’s stressful to figure out.

I’ll miss hearing the German language the most when I’m back in the ‘States. The stereotype is that German is an ugly and brutish language, but that couldn’t be farther from the truth. It’s a pleasure to listen to Germans hold a conversation in their native tongue. It makes me want to become fluent that much more.

My class wasn’t too different from the German classes I’ve taken at Alabama, other than the professor’s conduct and demeanor. You could tell that the German professor who taught in Germany tried hard to separate his work life from his personal life. In America, most professors are willing and want to establish a personal relationship with their students. The dynamic in Germany, I think, is different, and that extends to all professions: there is a clear line between work and personal life. I loved my class. My professor, although he may have established a clear line from personal and work life, was very kind and made learning a new language enjoyable. He encouraged us to participate and to practice speaking, which can be scary. My classmates included people from all over the world and of all ages. I had classmates younger than me from Lebanon, my age from Paris, and older than me from Mexico City. I simply loved the diversity.

Even though I was in Berlin for four weeks, I feel like I barely scratched the surface of the city. I didn’t’ take any excursions outside of Berlin during my time there because I wanted to maximize my time in the city. However, when my group and I went to Munich, we took an excursion into the German countryside to see the famous castle of Neuschwanstein—the basis for the design of Sleeping Beauty’s castle in Disneyland. It was stunning. The countryside was so beautiful! It definitely made me want to come back some day to see more of it.

Germans are special people. They can be very direct and blunt if you don’t know them all that ell, but very kind and sweet people once you break the ice and get to know them a bit. Watching how German parents parent their children in public is a funny experience as well. They take the idea of tough love to heart and they don’t take any sass from their kids. As a result, kids—and adults—are incredibly well-behaved. It’s strange to have reached the end of my program. After five weeks of learning and experiencing a new culture with the same, small group of people, it’s strange for it to all end so suddenly. I’ve made some good friends on this trip, including some people who will be graduating very shortly. It makes it even more bittersweet to know that I won’t be able to easily hang out with them in T-Town. The memories I’ve made with them here have been special, however, and I won’t ever forget them. 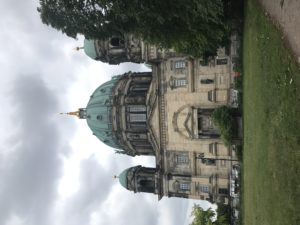