My adventures in Greece came to a conclusion, and I having met so many great people and the country exceeding my every expectation, can not wait to return. I can’t thank the locals who showed me such great hospitality enough. And with that conclusion came the actual study abroad portion of my summer. I boarded a flight to India and was on my way to a country which, according to everyone I know who has visited India before, confirms it is unlike any other place on earth – and they were right. The director of our program in India said at one point to remember that India defies standard logic, furthermore logic doesn’t apply. India is a country living is 7 centuries at once. The roads are populated by people on foot, people on horse drawn carriages, people on bikes, motorcycles, cars, and rickshaws all travelling is perfect chaos in every direction. And that is just the human traffic. Invariably there are cows, goats, chickens, and dogs all meandering the roads like citizens of their grand country. There is no central garbage collection in most places so it collects in heaps near the edges of town, or bodies of water. Many locals wish they had cleaner cities, but it is difficult to change the mindset that dictates that littering is acceptable. Cable internet is slow just about everywhere, but LTE coverage exists in rural areas with great strength. Sewer systems and municipal water are lacking, so many Indians collect water from filters/pumps near the suburban centers. However, for a country that lacks so much infrastructure, there is no shortage of life. I suppose 1.3 billion people do a fair job of giving a place life.

My first day in India was not all that crazy, I did end up meeting a local who split a tuk-tuk fare with me and we travelled around Delhi together. I later found out he worked for one of the shops that we went to that was set up to overcharge tourists. Thankfully I didn’t buy anything. After my first day, education in India began. Starting with a handful of monuments we explored Delhi and began to learn the history of a country that in the eyes of its people has been ruled by foreigners since civilization has started, that is until 1947 when India gained independence from the United Kingdom. We learned in detail the rise of various empires throughout history, and how these cultures still play into the dynamics and diversity of India today. In fact, India has had the greatest Muslim population in the world for a large period of time as a result of the Mughal Empires from the Medieval Period of Indian history. Today, this huge Muslim population faces the challenges of a growing Hindu nationalist movement. I would venture to say that political climate is almost similar to that in America.

The historical context gained in the first portion of the trip really helped to make sense of the villages we would go to visit in the second week of the trip. A short blog, or even a full novel can not begin to put into context everything that can be experienced by visiting such villages. We first visited a tribal village that lived near a national reserve, living off the land and the milk of their buffalo. They had no electricity in their homes and limited access to the outside world. However, a lot of that is changing. They are being forced to migrate closer to towns by the government. Many use cell phones, and are getting government funded jobs. Despite some modernization, the lifestyles still are quite tribal in nature. The roles of people are well defined, especially for women, diets are often limited, dental hygiene is significantly lacking, and education is often cut short.

Incrementally the villages we visited became more modern and closer to the cities. My favorite village was a medium-sized village outside of Agra. The people are partially reliant on agriculture, and others work in town and return home at night. There is electricity, a few underfunded or overcrowded schools, and slightly decreasing amounts of caste based separation. After visiting a house and a man who tutors students after school (a common practice to prepare for University entrance exams) I got the grand tour of the village with the young people who had to speak to me almost entirely though gestures since they spoke no English and I no Hindi. Despite this communicative limitation, enough was communicated for us to play volleyball, cricket, and finally have pushup, pullup, and headstand competitions.

Overall India is teaching me so much about the way a country develops, how cities urbanize, and how business evolves as modernization runs through a low-income economy. The things I learn here firsthand are offering a perspective on life that is totally new. It is both depressing to see the dilapidation, but inspiring to see the ambition in others. The ambition yearns for cultivation, thus the educated of India and abroad must learn this culture in order to cater growth to the needs of the people, which is the ultimate goal of this program. I am, therefore, glad to be here. 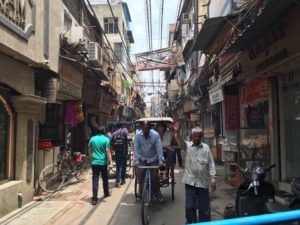