I’ve been back in the United States for about a week now and I have had some time to reflect on my summer abroad. I feel so incredibly lucky to have been able to spend six weeks in Barcelona and over two weeks traveling in Europe after my program ended. Although I would not trade my time in Barcelona for the world, if I were to make the decision regarding where I would study abroad again, I might not have made the same choice.

One of my biggest goals in studying abroad was to improve my Spanish speaking skills. In high school, I became very good at Spanish, but I never had enough real world practice to become fluent. I hoped that six weeks in Spain would help me to become fluent. I chose Barcelona because the programs there offered the most classes that were applicable to my major. In retrospect, studying in a smaller, more rural city might have been more conducive to accomplishing my goal of fluency.

In Barcelona, it seems that most people speak English. Although I attempted to speak with people in Spanish, they would more often than not respond to my Spanish attempts with English. I could definitely have been more persistent in my attempts to speak Spanish, but I was not confident enough in my Spanish ability. I feel that, during my time abroad, my Spanish only improved minimally.

I believe that, if I had studied abroad in a smaller city, I would have been forced to rely more upon my Spanish because I would not have encountered as many people that speak English so well. Again, my time in Barcelona was amazing and I would recommend the city as a study abroad destination to anyone. If improving your Spanish is an important goal in studying abroad, though, I would advise choosing a smaller city or choosing to stay in a home stay instead of an apartment. 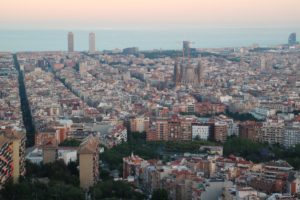