Coming back to the USA from being abroad always requires a period of readjustment, and this journey abroad was no different. My first feeling upon landing in Charlotte was that of being completely overwhelmed. American airports are a sensory overload! Everyone was speaking English, the A.C. was blasting and it was so so cold and all of the different fast food smells mixing together was a lot to take in. After a 20 hour travel day I was prepared for a slower reintroduction to my home country but it was all very abrupt. Reflecting on my impressions of the airport, there were obviously people who were speaking other languages, but the grand part of what I was hearing and what people were directing at me was English and coming from France and Spain, having been pretty thoroughly immersed in the language it required a period of adjustment.

My feelings about air condition are conflicted. When I was in France one of the things I complained about the most and stated that I missed was air condition, but after nearly 2 months in Europe without A.C. in my host family’s home and a lot of the other places I frequented being in an area with strong A.C. was in short very very cold. However, the adjustment to that happened quite quickly as Alabama summers really do warrant the use of A.C. in my opinion.

Another thing I missed a great deal about the states was the variety of food options that I have grown accustomed to eating throughout my life. I am not ashamed to admit that I stopped by Chipotle for my first meal upon arrival! It was delicious, but it took a bit of time for my body to readjust to eating the way I was accustomed to eating before leaving for France.

My first impressions upon landing in the United States were pretty spot on for the three areas that would make adjusting back to home difficult: Language, Environment, and Food. I have to admit that on occasion I still catch myself saying merci instead of  thank you, s’il vous plaît  instead of please, and à vos souhaits instead of bless you , but my brain is slowly acclimating back to using English as my primary language. In the mean time, the code-switching has lead to some very interesting conversations. In regards to environment I think I have been running my A.C. at a higher temperature except for in the car, like I mentioned before those Alabama summers are no joke, but being in France during a heat wave without constant air condition reminded me that it is a privilege not a necessity and I am very thankful we have central air in the South! And last but not least, the food, I can’t say that I really miss French food, but I do miss the croissants and fresh bread for Breakfast, having meals split into courses and  the opportunity to step out of my comfort zone and taste some new dishes. Being back home is great, but I do think about the next time I will be able to go to France. I feel a bit of nostalgia for the experiences and memories I made with the people I was with and the places we visited. Going back will never be the same, but I am excited to see what the things I have learned do for me both in the classroom and out and how much more I will advance in my French 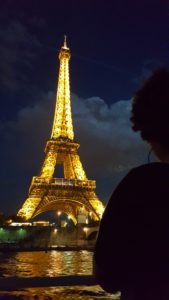 before the next journey back to France!