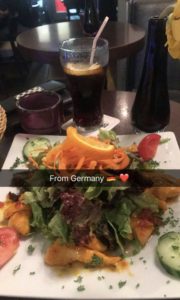 As an American, my mind has of course been saturated with American brands, products, and media. However, I never fully considered what kind of impact American marketing could have on people around the world.

Between a long layover in Germany and my time spent in South Africa, there were two American entities that followed me on my journey from Tuscaloosa, to Atlanta, to Chicago, to Frankfurt, to Johannesburg, to Cape Town and back: McDonald’s and Coca-Cola.

Days ago, I had a conversation with a student at the University of Cape Town, an institution that she insists draws students from across the continent of Africa and serves as the top university in South Africa. For a time, we discussed the impact of American and European culture on the South African economy. I lamented to her that in my quest to find clothing in Johannesburg from South African-made brands, I was faced with a mall complete with a two story Forever 21, a Krispy Kreme, and a number of British and Italian stores and restaurants. Although there is no one “authentic Africa,” it was disappointing to go into a mall there and see that American brands were so pervasive.

From our conversation, I gathered that while South Africans are by and large enterprising entrepreneurs who sell food and clothes and offer services in shops or by the roadside, few people have the means or, in some cases, the will, to create South African clothing labels or chain restaurants because they are taught not to value their own products from an early age. South African media, like American media, praises American-made anything (clothes, food, movies) as the greatest of innovations, a fact that builds up the confidence of children in the West while simultaneously preaching a narrative of inferiority to children in other parts of the world who then grow up only wanting to buy American.

This theme is not new, either. This conversation may have been one I recalled only in passing if not for the fact that through the course of my readings, I have come across Coca-Cola several times, a thin and strong thread interwoven between many stories. This includes Alex la Guma’s “A Walk in the Night” short story in which Michael comes across “shop fronts with the adverts of shoes, underwear, Coca-Cola, cigarettes” (p. 7). The specter of Coke also makes an appearance in July’s People by Nadine Gordimer, when one character recalls “Royce, the littlest, [who] kept asking for Coca-Cola” (p. 35).

As these books are set in the 1960’s and 1980’s respectively, this begs the question of how long the people of South Africa have been made to feel as though their own attempts at branding are simply not good enough.

In America, Coca-Cola, while beloved, is just one of many soda brands that got their start in the US. Interest in McDonald’s is in fact waning domestically (at least among millennials) as more Americans turn to fast casual dining experiences like Chipotle that offer higher quality and comparatively healthier ingredients. Yet, to people in other parts of the world, these are not merely brands. They are representative of all that America has to offer: freedom of expression, freedom of religion, long standing democracy, and a level of diversity and equality that is difficult to rival. Though not perfect, America represents opportunity and hope for a lot of people.