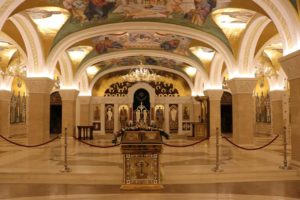 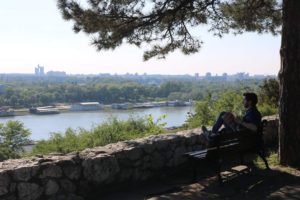 Today is Day 3 of the Serbia Fellowship Experience – the first full day after transit, and we are just beginning to get acquainted with the city of Belgrade. The weather is slowly warming and extending a fonder welcome. This morning, I stopped at a kiosk to purchase a copy of a periodical newspaper that is written entirely in Cyrillic. Translating the headlines gives me a better insight into the happenings of the week from this new perspective. One of the inner stories I found started with ‘Tito wasn’t without fault, but he was successful.’ Later we walked up the street to the Church of Saint Sava whose green dome decorates the skyline. The entire plaza was manicured with flowers and accompanied by the hum of fountains. The main hall of the church was grand though under much renovation. The lower level, however, was absolutely ornate, having recently been redone in vibrant gold and murals. As we emerged, thin candles were being lit by visitors in prayer then placed to melt steadily in vast sand basins. There was a serene aura. Back down on the street, we visited a popular street food store whose employees sport iconic yellow/red uniforms. I ordered a šiš ćevap (a minced beef staple on a long bun), which was a good choice, but I’ve promised myself to keep branching out in my food choices.

Overall perhaps the most interesting thing about Belgrade is its unique mixing of old and new. Walking in the streets, one gets the sense that eras are woven together at every turn. Empty buildings are visible next to new constructions or Ottoman monuments. And the city has a wealth of green spaces that appear at most corners. In the afternoon, we met with Miloš, who works at the Ministry of Youth and Sport, to do some further acquainting with Old Belgrade. We walked through the wide, striking fortress of Kalemegdan all the way around later to the Serbian National Parliament. The fortress is like a concourse of nature and pathways that culminates in a large outer fortress of retaining walls. It’s truly beautiful and unlike any structure I’ve seen before. Since the Serbian Parliament was in session, it’s doors weren’t open to the public then. But we sat across the ways on park benches for a time. In conversations with Miloš, he explained about some of the dynamics and recent histories of Serbia and the region. After parting ways, we entered a coffee shop, as is a favorite pastime here. As I reflect on my time in Belgrade, I can’t help but feel that I’ve only just scratched the surface. Each time I interact with a pharmacy technician or a bakery costumer though, I feel a bit closer to gaining a more complete picture.