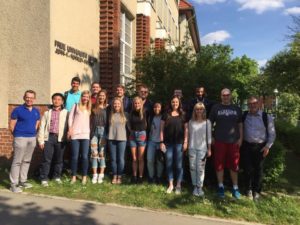 Studying abroad in Germany was not at all what I expected. For instance, we were able to shadow a classroom at the JFK Institute in Berlin and I was shocked when the professor started speaking in english. The classroom has a more relaxed feel to it and the students are able to eat, drink, talk, and play on their phones and the professor do not seem to care at all. The professors and students have a friendship type relationship and joke around with each other and hang out at the pub after class is out. In America we keep distinct professional line between the students and professors. It was also interesting to find out that after a professor is done lecturing you knock on the table to show your gratitude. It is also free to go to universities in Germany due to taxpayers money which I thought would make the facilities not as nice, but they were wonderful. The profession of a professor is very well respected because Germany puts educations as one of its top priorities. The only catch is that since it is free to go a lot of people apply so not everyone is able to attend college. Some students told us that they waited three years before they were able to go and some had to pay to go to private universities because they did not want to wait. The students were so dedicated to their studies and they take around 20 hours of classes a week. The system is so different in Germany, but ultimately they are in it for the education just like in the United States.