The real reason why

Currently, I am a senior double majoring in business and Spanish at UA and I am absolutely and completely lost. I have 6 credits left to graduate in August and in order to fulfill those, it seemed way more enjoyable to go abroad and try to gain some fluency from the locals rather than sit in Tuscaloosa for 3 hour classes every day (added bonus, I get off of work for the summer too woohooo). With Costa Rica’s attitude of “Pura Vida” I can’t imagine a better place to enjoy the summer and to explore life – who knows, maybe I’ll even figure out a direction to get me out of this lost spiral.
If you asked me my logic for picking Costa Rica as my place to study abroad, I could give you two reasons: the diplomatic and societally “correct” answer, and the real answer. Sure, they both matter, but the latter was much more of a driver behind my decision than the former. The following are both reasons:
I’m going to Costa Rica because it makes sense. I am a student putting themselves through college and going to other popular Spanish speaking countries, such as Spain, is extremely expensive. I am staying in Heredia, an inland city about 30 miles from the capital, San Jose. Since it’s not a coastal city, it’s less expensive. Furthermore, Costa Rica is a beautiful country with lots to explore and admire. It’s also only a 3 hour flight away and doesn’t have a time change – again making money matters and logistics way easier.
I’m also going to Costa Rica because it has the largest sloth sanctuary in the world. There, you can hold a sloth, nurture them back to health, and admire them for the unique and utterly adorable creatures that they are. People argue with me on this; I don’t listen. Four years ago, my senior year of high school, I had a fun loving best friend named Colin who was as obsessed with sloths as I am now. He was crazy and liked off the wall things – horse shampoo for example. Unfortunately, he struggled with mental health issues that were completely outside of his control, and in 2013 he killed himself. I am going to Costa Rica as a pilgrimage to him. I’m sure he’ll enjoy this experience right alongside me. Rest in peace, little sloth. 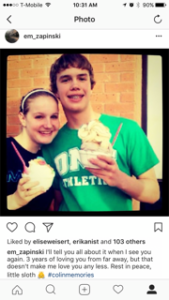