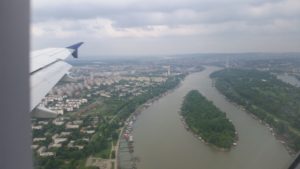 It is Day 1 of the Serbia Fellowhsip Experience. And so far, it has been unlike anything I have ever experienced before. I have traveled internationally on a number of occassions, and I have even studied abroad for a summer term. But the Serbia Fellowship Experience has been different because it is also about building community with my peers from the university. We traveled as a cohort together from Atlanta, Georgia to Belgrade, Serbia. Through the crowded airports and slight delays, we reached the Slavija Hotel at around 8 p.m. tonight.

My intial impression of Belgrade was ‘calm’. The airport is located west of the city, and as the bus rolled us through green countrysides and milled fields towards the city’s center, I was reminded of Alabama. It could well have been a dusky drive on US-72, except for the way our voices juxtaposed the Serbian ones filling the cabin. Slowly, buildings began to come into focus with their distinct architectures apparent. Belgrade was filled with soccer fields and goals being used for the beautiful game. The streets were wide and sparse, the city large but not dense.

Then we came across one of the bridges over the Danube or Sava River, and it was stunning. Belgrade stretches beautifully along the waterfront in both directions. The landscacpe receeds upwards gently from the banks and creates a staggered effect with the buildings. There were boats dotted by the shores as far as I could see. Belgrade is an interesting mix of old and new. It has had to rebuild itself on several occassions, and the built environment reflects this. For dinner, we ventured into the midst of the old city and stumbled into an Asian-style resturaunt. Aftewards, a slight sprinkle accompanied us down Knes Mahylva (the trademark pedestrian boulevard), and we walked past several shops and cafes and people. The weather today felt firmly autumn-esque and fit the atmosphere well. I am excited to continue to learn more about Serbia, its people, and its capital. Belgrade has a given us a brief introduction that leaves me yet ready to discover.

Along the way, I am working to build my Serbian vocabulary. Before departure, I studied some basic phrases, conjugations, grammar, and nouns, but I hope to develop a better working sense of the langauge. So far I have used my first successful ‘dobro vece’ to wish good night to an elderly couple on the elevator with whom we were otherwise unable to interact. I am grateful for the clarity that language can bring, and I want to communicate here (and anywhere) as best I can. This is perhaps the trip where I have been least versed in the language of the host nation, which is a challenge all its own. I’m learning a great deal, however. The first day has been a pleasure, and I looking foward to the next two weeks.