Out of Place in Paris 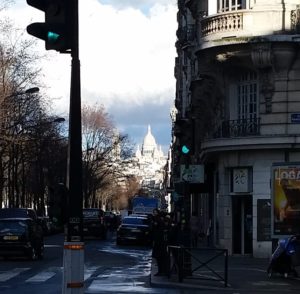 A view of the Sacre Coeur Basilica around the corner from my housing on a beautiful (and rare) sunny winter day in Paris.

After over twelve-hours of total flight time, accompanied by a nine-hour time change, I arrived in Paris in the late afternoon. I was dirty, hungry, and tired, but my journey had just begun. Upon arrival in Paris, I found myself struggling to adapt to the language difference, as my untrained ear and three-year hiatus from French classes meant I no longer had the vocabulary nor the listening skills to even understand a rudimentary statement from any native francophone—francophone being the official term for a French speaker. Unfortunately, the Parisians had the same level of understanding in English as I did in French.

I soon realized the importance of public transportation, as it would be my primary mode of travel anywhere I would like to go in the city of Paris, as well as the surrounding suburbs. However, having never lived in a city, I was unaware of the speed at which life would move around me, causing me to be swept through subway stations as if a strong current were channeling me in a given direction, and I was powerless to stop it.

When I found myself to be lost, as is often the case when scouting out a subway station for the first time, I realized the lack of English-speaking abilities of the average French person, and it began a constant struggle to communicate, but also encouraged me to pour my time and effort into learning the French language so that I might be able to communicate with others in their language, rather than require them to speak my own. Hopefully in the coming months I will gain enough conversational French to make up for my shortcomings, and I am certainly looking forward to the challenge.

I have now lived in Paris for over a month, and I can confidently say that I am now no longer the confused American tourist as mentioned above; rather, I have learned the culture, the customs, and enough French to make it through most activities. Now, I look upon the confused American tourists I find on the metro trains from an outside perspective, as my time in Paris has even shaped my worldview and understanding of myself. My work is not done, however, as I am far from fluent in French language and culture, and so I will continue to learn and progress in the hope that one day I will find myself indistinguishable from the city of Paris as well as its people.