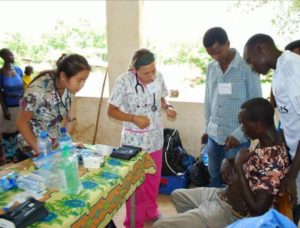 We went to a government funded clinic in a town about 5 hours away from where we are staying today. There were a lot of people gathered outside when we arrived, I think they knew we were coming. I was put in the assessment group and we did a quick assessment of the patients main complaint before sending them to the provider. Each patient got a numbered sticker so we could be fair and keep track of people but it was hard to assess in order because standing in lines isn’t really a thing here. We took each persons blood pressure also and temp if they said or we suspected a fever. The village spoke a more remote dialect so we actually had 2 translators and it was kind of like playing telephone x) sometimes we would ask a question and the answer we got back wasn’t what we needed at all haha…but we’d keep trying different wordings and we would eventually get across! The main complaints were abdominal pain, back pain, and actually malaria… We discovered later though that people would just say that like we would say “oh i have a head cold”, so not really sure. Wow. So strange since it’s almost like an urban legend back home. They would also say “I’ve had it for 2 years”… And I had to clarify that they’d caught it multiple times over two years because it’s impossible to actually have it that long…it would be fatal and they would not be sitting and talking to me. Breastfeeding is very nomal here. No one looks twice when a woman decides to breastfeed her baby in public which took some getting used to for us! The children love pictures (especially selfies) since many have never seen themselves before! One of the most urgent cases I saw today was a baby with a 105 degree fever! I sent them directly to the doctor. Later in the day we sped up diagnosing simple problems like parasitic infections by pairing a provider with an assessment person like me to treat patients right at the assessment station. I liked this because I got to help decide the diagnosis and see more of the treatment process!