halfway through being halfway across the world 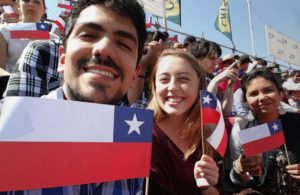 Hola from my room in Santiago de Chile! I am officially halfway through my study abroad trip, having finished the first two of my four consecutive intensive Spanish classes. Let me tell you, when they say, “intensive,” they really are not joking. I knew coming into this trip that it would be difficult to learn Spanish well, especially since I’m only in the second level of four Spanish levels. It seems like I’ve learned a complex grammatical structure every day, so much so that it’s even becoming confusing to speak English! However, it has definitely been a plus to be so immersed in Chilean culture. Just the other day, my Chilean mom told me I was getting so much better in Spanish conversation!

To recap the first half of my time in Chile, I guess I should go back to the beginning. When it was actually time to leave home and travel way, way south all by myself, I have to say that it was pretty scary at first. I have never traveled out of the country before, especially not by myself. When the plane first touched down in the Santiago airport, my thoughts were probably running along the lines of, “What the heck have I gotten myself into?” I met up with the other students from my program to collect our bags and find our directors, but I still felt very out of place and kind of lonely. We rode on a bus to our orientation hotel, and as I got my first few glimpses of the city, I was in awe, overwhelmed, scared, and excited all at the same time. Santiago is definitely very different than Tuscaloosa. It’s a huge city with lots of tall buildings, graffiti, stray dogs, street vendors, and grates in the sidewalks that exhale metro fumes. The Andes mountains set up a beautiful backdrop in the west, and at first I could even see snow on the tops. The first week, our directors took us on a bus tour of the city and we got to get a closer look at where we would be living and exploring for the next three months. We visited and took pictures in front of La Moneda (the president’s palace), La Plaza de Armas, and a few of the city’s parks. The first picture that I took in Santiago was of me touching the top of the Costanera Center, which is the tallest building in the South American continent.

The culture of Santiago has definitely been so interesting to be a part of. The food is delicious and can be found for super cheap. There are food stand right outside my school building that sell empanadas, arepas, fruit, juices, and sweets. The Chilean people are very animated and welcoming. My Chilean friends and their families have welcomed me into their homes, cooked for me, taken me to new places, and helped me practice my Spanish. The people of Santiago are very fast-paced, which is different and exciting for me, although sometimes it can also be overwhelming.

On the weekend of September 18th, I got to be a part of the city’s independence holiday celebrations. Chileans take the whole weekend to celebrate with fairs and parties all over the city. I went to a fair with my host family, where I got to witness a Chilean rodeo, ate delicious barbecue with chocolate-covered fruit, and danced the traditional “cueca.” It is a law in Santiago that all houses and buildings set out a flag for the holiday, so the Chilean flag flied all over the city for the week.

I attend school at Universidad Andrés Bello, which is very close to a lot of the city’s main attractions and other universities. My class is small, only 16 people total, but I like it that way! We get a lot of one-on-one time with our professor, who is super helpful and fun to learn from. My classmates are all from the States, mostly from the northwest, except for one who is from New Zealand. Class is basically the same as my classes in Alabama, with a few differences. We never use the Internet for assignments, which is probably due to our lack of Spanish skills rather than the school being old-fashioned. Classes never start on time and our professor usually shows up a few minutes late, but that’s just running on South American time! I think I’m used to it after always having to wait for my Latino international friends to get ready to go somewhere in Tuscaloosa. It’s been a little strange and difficult to learn the language intensively. It’s not like learning something that you understand as soon as it is taught. Instead, I have to understand what is being taught by relating the words in Spanish to words in English. Even then, I have to communicate by thinking of words in English and then translating them to Spanish. If you think it sounds like a headache, you’re right! But I can see how this style of language-learning will help me in the long run, because I’m already seeing major improvements in my listening and speaking abilities!

With our program, we took two different day-trips outside of Santiago. For the first excursion, we traveled to Valparaíso, which is the main port city of Chile. It took about three hours to get there on a bus, but after that we had all day to explore! We saw the Pacific ocean from the coast of Viña del Mar, the sand dunes of Concón, and got to eat chorillana close to the beach! On our second excursion, we went to Ocoa Valley in the Parque Nacional La Campana, where we got to hike up a little mountain and see the palmeras, which are palm trees specific to Chile that have really wide trunks at the bottom and are said to look like wine bottles. I have also had the opportunity to do a bit of traveling with some friends I have made from my classes. Last weekend, we went to Pucón, a really beautiful city that sits about eight hours south of Santiago. Pucón sits right below three volcanoes, the biggest being the active Volcán Villarica. During that trip, we got to swim in the natural hot springs, go white water rafting, and explore all of the markets that sold handmade souvenirs. Before that trip, all of my Chilean friends said that Pucón was one of the most beautiful cities in Chile, and I have to say that it definitely did not disappoint.

I can already tell that my study abroad experience has changed me, but it’s hard to explain how. I have explored and seen so many new things in such a short amount of time; it has all been kind of a blur! But I can tell that returning home will be bittersweet. I miss my family, my friends, and, of course, Tuscaloosa and I’ll be so happy to return home and return to “normal” life. It has been so great for me to get out of my comfort zone while in Santiago, and I have had to learn how to interact with my host family and friends in a completely new culture context. I’ve had to adapt to a new language and learn how to do things for myself without being sure of the “right” way to do things in this country. This has all helped me to be more independent and confident in myself and in my Spanish-speaking skills. Ultimately, I just feel really proud of myself for all that it took to get here and all that I have accomplished while abroad. It was a tough process of buying documents, applying for scholarships, and getting things in order to finally arrive to Chile. It has also been difficult to adapt to a different culture and way of life, but I’ve done it! I have seen so much already that has really opened my eyes to all the differences and similarities that different cultures have to offer. It’s going to be interesting to see if the second half of my trip matches the first half, but I guess I’ll just have to wait and see!