Weekend Trip to Brussels and Amsterdam

Despite the intensive lab course we were taking in Denmark, my friend and I were able to take a weekend trip to Brussels, Belgium, and Amsterdam, Netherlands.

We flew to Brussels on Friday morning and immediately started sightseeing since we were only going to be there a day and a half. We walked to Grand Place, the central square of Brussels and a UNESCO World Heritage Site. We also saw St. Michael and St. Gudula Cathedral. Of course, we also had a Belgium waffle topped with melted Nutella, strawberries, and whipped cream. It was amazing. For anyone considering visiting Brussels, it was neat and worth going to, but it does not require long to see everything within the city. We were only there for a day and a half, and while we were exhausted by the end of the rushed trip, I experienced everything that I wanted to.

On the 2nd day in the afternoon, we took a train to Amsterdam. Amsterdam was very cool. I would describe it as a New Orleans and Venice combination that is way more intense. My favorite thing that we did there was see the Anne Frank house. We all grew up learning about Anne Frank and her story, so it was neat getting to actually walk through where she was in hiding during World War II. We also saw the Van Gogh Museum and the infamous Red Light District. 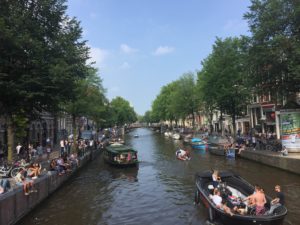 Brussels was cool, but I have to say that Amsterdam was definitely my favorite out of the two. I highly recommend anyone that is studying abroad in Europe to take as many weekend trips as possible! The majority of the cost to visit Europe is the international flight. After that, room and board can be cheap if using booking sites. Stay in hostels if possible. Our hostel in Brussels was only $20. However, I definitely recommend that you do not bring anything valuable to the hostels. While I did not have any problems with anything getting stolen, I also carried basically everything with me the entire time which was annoying. I had my MacBook because of lab work, but if I hadn’t of had that, I definitely wouldn’t have worried at all about leaving my stuff in the hostel.