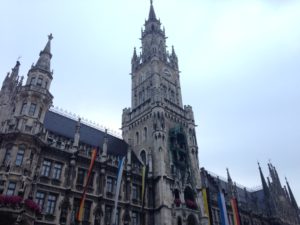 Berlin is a city of immense diversity and many different cultural influences. I am grateful to have experienced all of them during my stay.  Finishing my class at the Humboldt University made me feel both proud and sad. I learned a lot from the class, and it was taught so differently from any class I had ever taken in the U.S.. The techniques our professor used were very interactive. We had to engage with our classmates and work on our conversation skills. We also went to events outside of the normal class hours such as a trip to Potsdam on a Saturday and a night out at the Gorki Theater.

I was lucky that after I completed my Humboldt class, I was able to spend a week in Munich finishing up for my other German class taught by a UA professor. The class covered Nazi-era Germany, and we were able to visit the sites that we learned about. One of the most powerful places we visited was the first concentration camp, Dachau. Having the chance to learn about Dachau while standing where all of those horrible things happened made everything sink in. We also visited the city of Nuremberg where the Nazi rallies were held. After walking through the old rally grounds, we visited a museum of the city that taught us much about where we had just been.

Leaving Germany and leaving so many new friends was more difficult than I had imagined. Just as you start really getting to know both the city and the people, you have to leave it all behind. When people say “I left my heart in [insert city name here]” they really are not kidding. Studying abroad is an experience like no other. If given the opportunity, please study abroad. It really is life-changing. As a caveat, it isn’t for everyone. One must be open and willing to change, and a lot of it. Culture shock can be a real thing, just make sure you are ready for all of the new experiences you will encounter. However, I was able to build friendships with people from UA that will last beyond the study abroad experience.