Notes From a Harbor Town 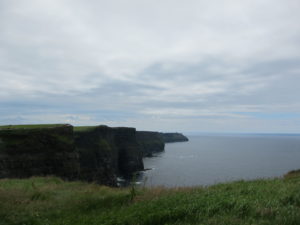 After arriving in Dublin after nearly twenty-four hours of being awake, my situational awareness was not at full capacity. But the first strange thing I remember noticing was riding the bus from the airport to the city on the left side of the road. A crash felt continuously imminent. The second thing I noticed was the bilingual road signs. Irish (often referred to as Gaelic in the States, though Gaelic usually refers to Scottish-Gaelic here) is the official national language of Ireland, despite Ireland being predominately a nation of English speakers. The population of first-language Irish speakers grows smaller each year, but it is taught in schools and used for public signs and official documents as way of maintaining a particular Irish identity.

From Dublin, we made the trip by bus to Galway, and though they are on opposite sides of the island, the trip took less than three hours. Dublin is an energetic, stimulating city, but Galway is the place I love. It is a harbor city, and seagulls and fresh fish are always present. It is a city made for walking, and once you’re downtown, which is less than a fifteen minute walk from our accommodations, it feels like every street has cafes and bookstores that pull you in. Galway does not pressure you into shopping or eating or spending money, but just walking around you feel invited to enjoy simply being in the city.

We took several bus tours from Galway, the first of which were to the Cliffs of Moher and to Connemara and the surrounding areas. The cliffs were breathtaking, and we were lucky enough to go on a day with no strong winds and few clouds. In Connemara, we were soaked by a light but constant rain. Such is Irish weather. We also went to Dingle, another harbor town, and the Aran island Inis Mor. It is impossible to completely describe the landscapes of these rural, undeveloped areas, or even to capture them in a picture. The areas along the west coast are not quite mountainous, but higher than hills, and everything is green or stony. To stand in those valleys, among the green slopes under a gray sky, was an experience I am sure I will return to for many years to come.