Back in the States

Although I’ve been back in the states for nearly 4 weeks I still find myself replying in Spanglish and there are some activities that just don’t feel quite right. For example meals out; don’t take enough time and the servers are too fast. This is something I assumed I would dislike in Europe but it turns out that I really miss it. Another example is the time of meals, I really enjoyed the meal times in Spain and I think it would fit well in American culture. Of course I miss the people as well; as I made several new friends, some were students at UA and others were locals in Pamplona.

Some of my first thoughts when I landed were that the tax system we use makes no sense. Besides Europe I’ve also traveled to South Korea and in both these places all purchases end in a flat number and taxes are included in the price. I find this makes sense as sometimes Americans seem to forget that when we get to the register our final price will be around 10% more than what we have put in our cart. 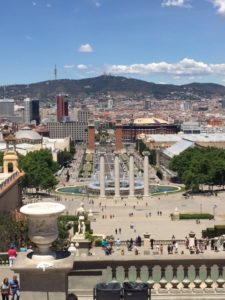 After studying in Spain I am a slightly changed person. For example I believe I am a stronger communicator as crossing a language barrier has improved both my English and Spanish. Another example is that I find myself more conservative in my resource usages. My homestay insisted that showers lasted no longer than 4 min in Spain. This was a big change as my average shower in America was probably around 12 min. Now that I’m back in America I’ve met the times in the middle and now probably take showers around 7 min. I’m also more aware of lights left on. I’ve also became more aware on how America is a wasteful country.

Some advice I have for anyone planning to study in Europe is to plan ahead! By this I mean you should plan to travel before or after your sessions of studying have finished. I say this because the most expensive part of traveling around Europe is the flight there. Once you are there you can get around and travel relatively cheaply but as I learned there trying to change the date for your flight back can be very expensive.