How to Speak French

Leading up to my study abroad, as I wrapped up all my Spring classes with finals and said my summer goodbyes, I began to get a little overwhelmed at the thought of leaving the US for nearly two months. There was packing to be done, paperwork to be filled out, and thechecking and double checking of flight information to make sure I wouldn’t find myself stuck abroad after missing a flight or mixing up confirmation numbers. However, the primary concern I had (which grew greater with every French class I attended) was the fact that I didn’t even really know if I spoke any French.

After taking French for only a year and a half, I felt fairly confident in what I had learned so far – but how far would this intermediate knowledge get me when living with a host family who could not communicate with me in any other way? Or when I boarded a bus for the first time and needed to purchase my fare? Or when I arrived in classes on the first day, taught exclusively in French?

In reality, past me should not have worried so much. The answer to all these questions was the same- I knew more than I thought I did, but I also didn’t know nearly enough. And that is completely expected.

The great thing about an immersion language program is that you learn exactly what you need because you hear common phrases and terms every single day. In Tours, there was a bagel shop fairly close to the school that we frequented. The two women who ran the store were extremely patient with us, and even though their English was limited, always offered up terms to help us. “Would you like it for here or to take away?” They asked on our first visit, picking up that we spoke English. When we asked, they taught us how to say both in French- “á emporter” for “to go,” and “sur place” for “for here.” “Sur place,” one explained, “Think of it like ‘on the place.’” She even wrote it down on a napkin to show us so that we would know how to spell it.

In almost no time, things that I wasn’t super clear on before were solidified into my brain. In fact, so solidified that sometimes we would think of French words before we came up with the words in English. Even when talking to someone in English, I always said “merci” and “c’est pas grave” because it became second nature.

I’m not saying that now I am completely fluent in French- I still have a long way to go! But being immersed in the French language and surrounded by everyday language was really illuminating, especially in helping me see what I need more practice in and what language skills are really important for life in a francophone country. Studying abroad helped my language skills develop in ways that I could not have possibly achieved from home, and I am so glad that I had this opportunity. I’m ready to get back to UA and hone my French skills even further! 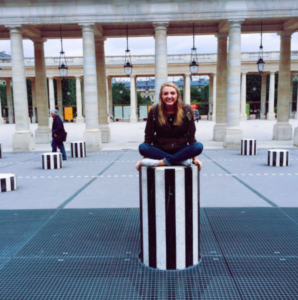