A World Beyond All Imagination

In the year 2000, I got bit by the travel bug. Seeing as I am 21 years old, you may be looking at the year and thinking it was a typo. No typo here, that year is accurate. At age 5, I decided I was going to travel the world. I had just started learning French, something relatively uncommon for the public education system and was exposed to something that not many children my age have the opportunity to grasp, something people may not comprehend until they are much older. And that thing was perspective.

Flash forward 12 years and I had begun looking at colleges that I would attend. I had lived in various places around the United States, but had NEVER been out of the country. Studying abroad seemed to be the most logical step in the world, but as an engineering major, it could be difficult to transfer class credit and therefore not really an ideal path for this degree. That is, until I came to the University of Alabama on a college visit and learned about the Denmark program. For one month, I would be able to go abroad during the summer, take a class and travel around Europe. Seemed like a dream come true for me and was one of the many selling points of the University.

Currently, I’m typing this post from Ghent, Belgium, one of the 3 countries I chose to visit before my class starts in Copenhagen. And looking back on how I got to this point, I realize how fortunate I was to reach this 16 year long goal of mine. In the past two weeks, I have been in places thousands of years old with cultures deeper and richer than anything you can read in a textbook , been exposed to at least four different languages and have learned more about myself as an individual than I ever thought possible.

The world is evolving and changing everyday. On July 23rd, as I was walking around London and near the British Parliament, I observed advertisements and people campaigning to “Remain”. After listening more, I learned that “Remain” was part of the campaigning process for the United Kingdom to stay in the European Union. And of the people I talked to, no one thought it was a big deal, that the people would vote to stay part of the EU and life would continue as usual. Based on their opinions I thought nothing of it and the final vote concluded that night. At 6am on July 24th, as I traveled back into London, social media exploded. The UK, in a shocking turn of events, had decided exit the Union, known as #Brexit to the masses. We’re now still seeing the ramifications and turmoil this has caused and will continue to see it in the years to come. If I had still been in the States when this had happened, would I have cared? Yes. Would I have cared as much as I do now? Absolutely not. Traveling around the world not only teaches you about different lifestyles; it makes you care about them. 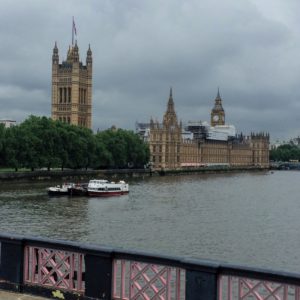 2 and a half weeks in, 4 more to go. I cannot wait to see what the world wants to show me.