The first week of Dr. Steinberg’s summer class “Rainforests, Reefs, and Ruins” was spent in the Toledo District. From there, we traveled to various locations to learn about Belize and participate in conservation activities. On the seventh day, we said goodbye to Punta Gorda, our beloved local bar, Waluca’s, and Punta Gorda for a change of scenery. We took a long bus ride to a boat dock in Dangriga and took a 45 minute boat ride to South Water Cay.

We docked at the Blue Marlin Resort where we would be spending the next week. This place was paradise. The water surrounding the island was blue and crystal clear. The island itself had perfectly raked white sand and large palm trees. I lived in a beach igloo with two other girls. The igloo

had large comfy beds, a fan, fresh towels, a shower with semi-warm water, and air conditioning. It was all you wanted after spending a week hot and perpetually sweaty in the rainforest. That afternoon, I settled into my new home and explored the island. All meals here were served on the dock that overlooked the ocean. Everything was prepared on the island, and the food was absolutely delicious. I already miss the fresh fruit and fresh squeezed juice that we had at every meal.

In the mornings, I would get a cup coffee and meet everyone at the giant table on the dock that sat the entire class. After breakfast, I gathered my mask and snorkel, fins, sunscreen, water bottle, and underwater camera for our snorkeling trips. On the first day, we took the boat out to a patch reef and a barrier island. Dr. Steinberg split out class into teams for a biodiversity project while we were on the island. The goal was to take pictures and identify terrestrial plants and animals, corals, invertebrates, and fish. At both snorkeling locations, you could identify brain coral, star coral, elkhorn coral, and staghorn coral. I also got to see so many beautiful fish such as a spotted eagle ray, filefish, parrotfish, and angelfish.

The next morning, we snorkeled in a new spot that was much deeper, because it was at the wall of the barrier reef. I had the afternoon free to work on my project and explore the island. I helped a few friends build a reef off of the dock using rocks old coral. Overtime, the reef will become colonized by fish and corals to create a new habitat. That night I was up late with a few others. A local came by and told us to follow him. We had no idea why, but we did anyways. He walked to the beach and a giant loggerhead turtle came out of the ocean. It was one of the most exciting parts of the trip. The turtle turned around shortly after and went back into the ocean.

The rest of the week we snorkeled in new places such as the mangroves. Every time I went into the ocean, I saw something new. Some of the coolest animals I found were nurse sharks, lionfish, southern stingrays, trumpetfish, an octopus, and a seahorse. One of the most beautiful fish I came across was the flying gunard. When I got close to the fish, it spread its fins out to make itself look bigger. One of my favorite activities was lionfish hunting with Joey. We found three under the dock, and he ended up spearing two of them. We took back the fish and ended up feeding them to a spotted moray eel which was pretty entertaining.

Overall, this class was absolutely amazing. I already miss everyone and living on the jungle and the island. I learned so much about Belize, the numerous cultures here, and conservation methods. This trip will always be one of my favorite memories. 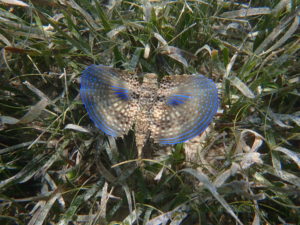 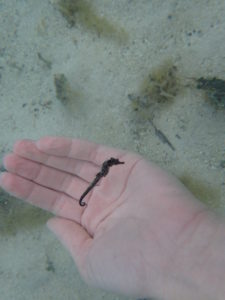 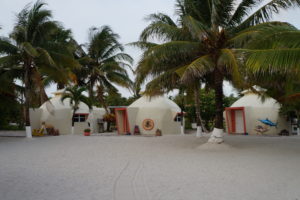 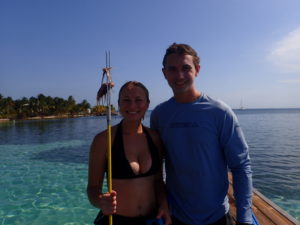