My first thoughts as I got off the plane in Huston after spending two weeks in Nicaragua were nothing as poignant as I might have expected. As the plane hit the tarmac there was an initial sense of relief about being home in the United States, but this was almost immediately replaced by a feeling of urgency. I realized I still had to make it through customs and all that it entails before I could board my next flight, which would take me back to Birmingham. As we progressed through the airport, my group of fellow study abroad students slowly dwindled as members peeled off to make separate flights heading to different parts of the country. Our little group of six that had grown so close during the last two weeks had all agreed that we would meet up after returning to school in the fall and I sincerely hoped that this would work out.

After I made it home and things calmed down I had more time to reflect on my experiences in Nicaragua. I knew I would miss the friends I had made that had traveled with me from Alabama and many of the other people that I had met there, but there were many things I really now appreciated about the United States. It was a relief to finally have air conditioning and be able to drink tap water without risking illness. Ultimately, I am very glad to be back in the United States but I do feel like I gained a lot from my time in Nicaragua. I definitely have a greater appreciation of Nicaraguan culture, a renewed enthusiasm for learning Spanish, and more understanding of what life is like in a country at a different stage of development than the US. The struggles that people in these countries have to face are more real to me now. Although I already planned to volunteer in countries with need after obtaining a medical degree, this trip has greatly reaffirmed my desire to help. 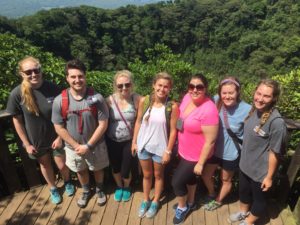