On to the Next One 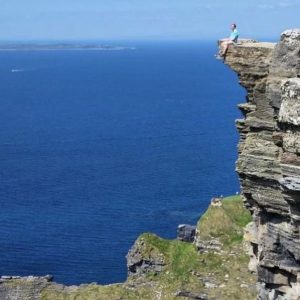 I’m writing this as we prepare for liftoff, headed to Berlin from Dublin. Our stay in Dublin was everything I could have hoped. My one worry, the perpetual threat of cold rain, turned out to be a nonissue. We received nearly immaculate weather on each day we didn’t have class, which I interpreted as a sign that Mother Nature wanted us to be outside of the classroom. I’m hesitant to share this belief with our faculty leader, Dr. Keskin, though. Our group has gotten along swimmingly and I look forward to maintaining these relationships when we return to the States.

Moving on, the most poignant moment of the trip for me thus far was our visit to the Cliffs of Moher. We were told several times that we’d picked one of the best days of the year to go. The views from this UNESCO World Heritage Site were breathtaking; so much so that I made the questionable decision to sit on the very edge of the cliffs, as you can see in my picture. My good friend Matthew described it succinctly as “edgy.”

It’s difficult to condense the entirety of the trip into words, so I’ll just include a few of the major discoveries and takeaways Ireland has left me. To begin, Ireland is an excellent place to do business. The country’s corporate incentives combined with its largely English language make it a haven. Next, Oliver Cromwell is not a popular guy in the country. I doubt his suppression of the state will ever be forgotten. Building on this point, the countryside is almost barren of trees. Why? Old Oliver decided to deforest the entire country to hamstring her economy, leaving only 2% of the land covered in trees. The country’s put into place an effort to reverse this. More, the country is appropriately very “green.” Energy conservation and recycling are emphasized heavily.  Another interesting (to me) observation is that going hungry after an Irish meal is painfully hard to do. I’ve been a lifelong member of the “Clean Plate Club,” but after this trip my fictional membership might just get revoked. Finally, the role of alcohol and the potato on the history of the country should not be overlooked. They each have a fascinating history that parallels that of the country itself.

To conclude, Ireland’s been an excellent host for us University of Alabama students. I trace heritage to the country and I’m prouder of that now than ever before. The island’s history has been a tumultuous one. Despite this, its people have been resilient beyond belief. This grit is hard to miss, particularly in its citizens’ senses of humor and kind, strong spirits. They’ve been as much a pleasure as any tourist attraction and I thank each person we dealt with along the way, particularly our tour guides and hotel staffers. Off to Berlin! 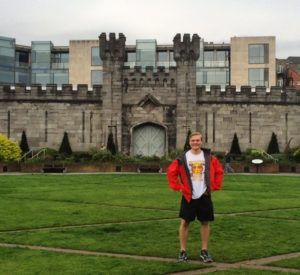