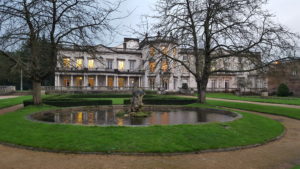 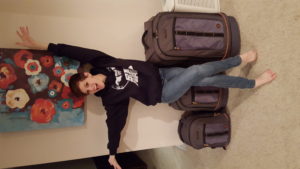 Is this real life? I think I might be dreaming. *pinch*.. Nope this is real…
Before:

Excitement and fear brewed inside me in the days leading up to my departure. People would ask, “Are you excited?” I usually responded with “Very!” but I was so much more than excited. I was terrified. This would be my first time ever leaving the good ol’ United States of America and I was completely on my own. I remember nervously wandering around the house on the day of my departure telling Bailey and the whole family how scared I was. When I finally had everything packed I started to feel a bit better and then we got to the airport. It didn’t really feel real until we started saying our goodbyes. Mom cried, Dad cried, Grandma cried, Bailey cried, and I cried. It was much more difficult to say goodbye than I expected it to be especially when Mom gave me that heartbroken look. (Mom, stop worrying, I promise I still plan on coming home.) I am very much so a sympathetic crier so when everyone else lost it I did too. Then I had to go through security with tears in my eyes. Thanks fam. Love you too. Anywho, the flight went great. I watched Inside Out, (cried again-if you haven’t seen it yet do it right now), and slept for two hours. Then the real adventure began.

When I got off the plane at Heathrow I headed to Terminal 3 where they would be waiting to put me on a coach to take me to campus. On my way to the terminal I ran into a girl who looked like she might be a student. I asked and as it turned out not only was she headed to the same place as me, but she had been on the same flight as me and we didn’t even know it. I felt a ton better after finding her. If I got lost I wouldn’t be alone; that was an amazing feeling. We were met in Terminal 3 by some very kind and welcoming Roehampton students. They loaded all of us silly Americans onto a coach and the whole ride we all simply couldn’t get over the fact that we were driving on the wrong side of the road. It just felt so wrong. We felt silly talking about it but we just kept going on about it. When we got to campus there was a group of extremely welcoming people with ethernet cords, outlet adapters, bedding, and kitchen supplies to hand out. On my way to my dorm I discovered that, coincidentally, the same girl I had met in the airport not only lived in the same building as me, but also lived on the same floor.

I woke up on Day Two really feeling the Jet Lag. I was almost certain I would throw up or pass out on the way to and during orientation. I even made sure I knew where the bathroom was before it began in the event I needed to run out of the lecture room. Right before our lunch break they brought us on a brief campus tour which turned out to help a lot. We got food at the eco-friendly cafe on campus, and by the end of the day (besides tired) I felt happily chipper, and much more comfortable finding my way around campus.
Since orientation day I have made some amazing friends, most of which are either fellow American dance students or my flatmates which are absolutely fantastic. I could not be more fortunate than to have the flatmates that I do. They have been so welcoming and we are already great friends. We spend most of our evenings either on the floor in our shared kitchen or in someone’s room watching movies and eating garlic bread. One of the days all us international students were sent on a scavenger hunt in central London. I made some good friends this day. We saw Big Ben, the London Eye, Millenium Bridge, Westminster Abbey, and so much more. It was such an incredible day in the city and I can’t wait to go back. But for now, I’m busy getting used to my class schedule.
I started my week enrolled in four dance technique classes and one Shakespeare course (with which I will be seeing three Shakespeare performances!). All of which I find extremely exciting, however apparently I’m only supposed to be enrolled in two technique classes so I will have to drop two and add another lecture course. What that will be is still up in the air, but since I don’t have a whole lot of gen ed left to take at the University of Alabama I will hopefully be in a London studies course, and if I am understanding correctly I should still be able to take all the dance technique classes, I just won’t get credit for two of them, which is alright with me. I’m here to dance and learn. I can play credit catch up next semester if it’s needed. On the topic of dance, I discovered two wonderful things to keep myself busy dancing here. I have an audition for a performance on Saturday morning so wish me luck! And then there is a group on campus called Dance Society that offers a ton of opportunity to take extra classes. I am so excited to see what this semester has in store for me.

This is going to be one for the books.