A Week in Warsaw

I have just finished up my week in Warsaw, Poland and it was truly an amazing experience! I am traveling with a group of students studying International Financial Reporting and what better way to do that than immersed in a new, international culture. I did not know what to expect from Warsaw as I had never talked to anyone that has visited before. I was unsure if anyone would speak English and if I would stand out based on my clothing. To my surprise, Warsaw is a modern and bustling city. Warsaw was almost completely destroyed by the Germans during World War 2  so all the buildings that look old were actually built in the 1950’s! There are still plenty of cobblestone streets and brick buildings in the Old Town district. One of the the most interesting things that we saw during our time there was the Palace of Culture and Science. It is a 42 floor skyscraper that was built by Stalin during the Communist era in Poland. Our group considered the building very pleasant to look at but many of the Poles that we talked to called it ugly and hated to look at it. I believe that this is because of the history behind the building and the connection to communism. I recommend that anyone who is traveling to Warsaw to head up to the terrace on the 30th floor for the best views of the entire city. Overall, Warsaw was above and beyond what I could have hoped it would be. There were so many attractions to see that I even wish we had more time there! 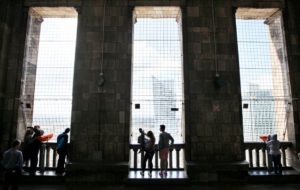