I took Dr. Steinberg’s summer class called “Rainforests, Reefs, and Ruins.” The first week in Belize was filled with activities organized by the Toledo Institute for Development and Environment (TIDE). On the third day, we traveled to a Mayan Village in San Pedro, Columbia. We met the Chucanit Group who founded the forest restoration project. They have planted over 1,000 riparian trees since 2004. Our class got to help with planting around 100 baby mango, guava, and kenep trees along the Columbia River. We each carried two plants and hiked through the village towards the river. On the way, we got to hold two endangered baby yellow headed parrots. Their tree got cut down, so a Mayan family is trying to raise them. It was such a rewarding experience knowing that these trees will grow up to help stabilize the river bank and prevent erosion while also producing fruit for the villagers.

For lunch, the Mayans prepared a hot chicken soup with vegetables and a starch that resembled a potato. They also gave us a cacao drink made from drying out cacao beans, roasting them, and grinding them into a powder. The powder is mixed with water and sugar, and it was delicious. After we finished our lunch, the Mayan women brought us handmade crafts such as bowls, jewelry, and sewn fabric to sell. We then planted more trees in another location, got to cool off by swimming in the river,  and then headed home. At night, we put on headlamps for a nature walk. We came across hundreds of spiders and trails of leaf cutter ants. It was really amazing to watch them follow each other in a line and carry pieces of leaves back to their nest.

The next day we took a boat trip to the beaches of Punta Negra which has one of the few natural and undeveloped beaches in Belize. It was a nice change of scenery from the rainforest. The water felt amazing here, so we spent the day swimming and playing in the waves. That afternoon, we took a boat to Payne’s Creek National Park. We came to learn about what the rangers do there and also spent the night. Their main mission is forest restoration and controlled burns. Before we arrived, our TIDE leader, Caz, warned us about the yellow headed parrots here. Payne’s Creek is working on rehabilitation and release of the endangered yellow headed parrots. Some of the birds have had contact with people, so we were told to ignore them.

When we arrived, we were greeted with a screeching, “Hiiiiiiiii.” You couldn’t help but notice the parrot and be tempted to take pictures of it. At first, it was amusing and fascinating to see such a beautiful bird that close. After it followed us around all day, broke into the screened in cabin (twice), and traumatized everyone, the bird became a nuisance. It especially didn’t like me for some unknown reason and tried to dive bomb me, mouth wide open, multiple times. We left Payne’s Creek to head back to Punta Gorda where we took drumming lessons. We learned about the creole culture, drumming, and food. We also learned which ones in our group were musically challenged.

We went zip lining on our last day in the Toledo District. I got strapped into a harness and climbed up an old ladder to the first of many platforms. It was exhilarating to fly through the trees and over rivers. After zip lining, we hopped back onto the bus and went to a waterfall. It was absolutely beautiful with smaller pools of water everywhere. We all ended up jumping off the waterfall and swimming in the pool below. The next day, we left the Toledo District and stopped at a Mayan ruin on our way out. The Lubaantun Archaeological Reserve is one of the best preserved Mayan ruins in Belize. Many structures such as the stairs, tombs, and sacrifice rooms were still standing and held together with perfectly stacked stones. After we explored the Mayan ruins and learned about the ancient civilization, we said goodbye to the main land and headed to South Water Cay where we spent the second half of the class. 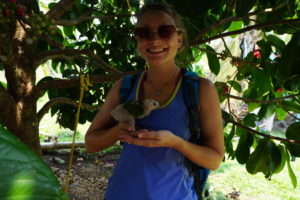 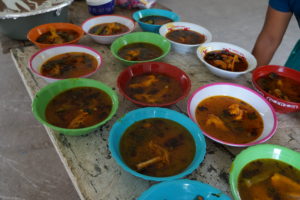 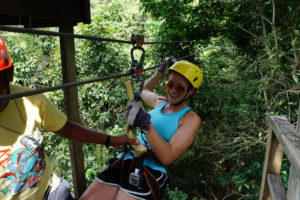